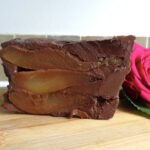 This festive chocolate-pear dessert is the brainchild of the chef Rodolphe Paquin, who presides at the Paris bistro Le Repaire de Cartouche. A few years ago, M. Paquin gave me a book he’d written on the art of preparing terrines. In this elegant example, a rich chocolate ganache is layered with caramelized pears into a loaf-shaped pan to produce a treat that is perfect for special occaions. Do I hear Christmas or New Year’s Eve, anyone? 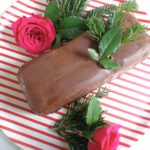 Preparation is fun. Pear halves are sautéd in butter and sugar until they caramelize and are meltingly tender. The ganache, a classic of French cuisine, is a mixture of high-quality dark chocolate and warm cream, stirred together until they form a smooth, rich sauce. The dessert is refrigerated until set, and may then be served sliced — or whole, to achieve a Yule log effect.

Ganache has an interesting history. A Parisian playwright, Paul Siraudin, opened a pastry shop near the Opéra in 1860. A couple years later, one of his apprentice chocolate-makers mistakenly poured some boiling cream onto chocolate — and the poor lad was instantly labeled a dunce (ganache). But his creation, when tasted, met with approval. Shortly thereafter, another playwright, Victorien Sardou, staged a comedy called Les Ganaches (‘The Dunces’), and M. Siraudin soon began selling chocolate bonbons called ganaches — in honor of his fellow playwright, not the apprentice — and the rest is culinary history.

This is my last post of 2020, which will go down not just as the year of masks, confinement and sorrow, but also as the year when home cooking staged a comeback. There are more visitors to this site than ever before — people in search of a way to brighten the indoor hours by creating beautiful food. On one occasion, someone with a Twitter following in the tens of thousands tweeted one of my recipes — for coulibiac — and so many people clicked on the link that The Everyday French Chef crashed repeatedly for 24 hours…

I’ve been writing this blog for eight years now, with no compensation other than the occasional comment from readers (and the still more occasional amusing event like the coulibiac incident). Why do I do it? Simple. Because I enjoy it. Especially in times like these, when it feels good to be reaching out to the world. In October alone, readers from 121 countries clicked on this site, mainly from the United States, Britain, Canada and France, but also from places as far flung as Ethiopia, Afghanistan and Papua New Guinea. I love the idea of someone in Papua New Guinea looking for a recipe for, say, coq au vin. 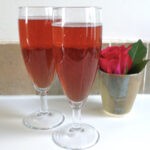 The site now counts more than 400 recipes — phew! — and I have a list as long as my arm of recipes still to come. Most I have posted with a blog entry, but every so often I slip one in surreptitiously for inclusion in the site’s Menus section. I did it again this week with kir royal. This festive champagne-cassis cocktail now appears in the Holiday Menus section, which I’ve updated for this holiday season. Check it out.

And so I leave you, dear readers, with hopes that 2021 will be a year of peace, joy and a return to life as we’ve known it. The Everyday French Chef will be on vacation on New Year’s Day, with my next post arriving on Friday, Jan. 8. Until then, here’s wishing you good health, happy holidays — and happy cooking.