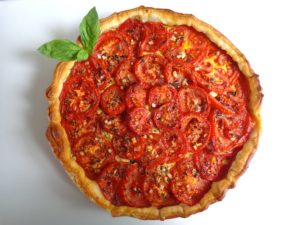 This classic French dish is best made at the height of summer when tomatoes are in their prime. Any tomatoes are fine. For the tart in the photo, I used three varieties — round tomatoes around the edge, Roma (long) tomatoes in the middle ring and cocktail tomatoes in the center. But let’s face it — the best tomatoes to use are straight out of the garden.

The secret ingredient of this tart is Dijon mustard, which is spread over the pastry dough before the tomatoes are placed on top. Garlic, thyme and olive oil also add flavor.

The tart is traditionally made using pâte feuillétée — puff pastry. I would recommend using the store-bought variety, as making pâte feuillétée at home is a bit of a production. If you’d prefer to make your own crust, you could use the savory pie crust (pate brisée) recipe on this site or scout around the web for a puff pastry recipe, for example Martha Stewart’s (which involves creating 729 layers of dough!).

Tomato tart is usually served in France as a starter, but it can also be a main dish, accompanied by a salad. There are many variations on the basic recipe (see below).

Place the pie shell in a tart pan, preferably with a removable bottom. Do not prick the dough. If using store-bought pastry, butter the tart pan or line it with parchment paper to prevent sticking.

Slice the tomatoes thinly — or, if using cherry tomatoes or slightly larger cocktail tomatoes, cut them in half.

Spoon the mustard onto the pie shell and spread it around with the back of a spoon.

Arrange the tomatoes in circles over the mustard, beginning at the edge and moving toward the center.

Peel and halve the garlic and mince finely.

Scatter the garlic and thyme over the tomatoes. Sprinkle with salt and freshly ground black pepper. Drizzle with the olive oil.

Bake 35 minutes, or until the crust is golden and the tomatoes are starting to brown.

There are many variations on the basic tomato tart recipe, the most common being the inclusion of grated Comté or Gruyère cheese, which is scattered over the mustard, with the tomatoes placed on top. Other possibilities include topping the tomatoes with crumbled Feta (for a Greek flavor), with mozzarella (more like a pizza), with anchovies or with olives. You can also scatter fresh basil over any of the above.