When Rodolphe Paquin walks out to chat with clients, everyone looks up. A giant of a man, rosy-cheeked and smiling, he exudes the fresh good humor that infuses his dishes at Le Repaire de Cartouche. Since taking over at the restaurant 16 years ago, Paquin, now 43, has made his mark with creative seasonal cuisine that draws on his Normandy roots. And at midday he offers one of the best quality-price ratios in town: an ultrafresh 18-euro three-course lunch.

I happen to know how significantly Paquin has transformed Le Repaire because I live in the neighborhood, in the 11th arrondissement, and went there once — repeat once — under the previous ownership. The food was so mediocre I was embarrassed to have taken my mother there. But now I stop by every chance I get. It’s a friendly place, on two stories, decorated with frescos depicting the life of a dashing 18th century bandit named Cartouche. 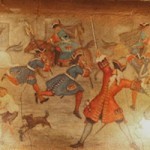 If this food sounds sophisticated, it is — but the menu also betrays Paquin’s country origins. He was raised on a farm near Fécamp, on the Normandy coast, and his culinary style has stayed true to his upbringing: don’t waste anything, follow the seasons. Which isn’t to say he’s not modern. In fact, as Paquin admitted the other morning when I stopped by for a chat, his favorite music is punk rock (which seems to be a trend among chefs in my neighborhood, or maybe just among chefs). Before heading into the kitchen to make lunch, he spoke with The Everyday French Chef about how he chooses his products, how he cooks his sea scallops, and why it’s better to be a chef in Paris than in the country.

Hello Monsieur Paquin. I’ve been coming here for many years, since before you took over. When was that? 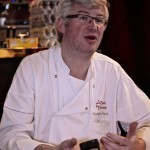 I’ve been at Le Repaire de Cartouche since 1997, when I was 27 years old. I’d already been working as a chef in Paris for 4-1/2 years, at a small restaurant that no longer exists. I was ready to move on and heard this was up for sale. I dined here once and bought the place.

What changed when you took over?

The main thing I changed was the philosophy. My philosophy is to respect the clients and to respect the seasons. As a result we have a menu that changes in rhythm with the local farmers’ markets. We’re not going to use green beans flown in from Kenya in midwinter, for example. At this time of year, we’re making purées using seasonal vegetables like turnips and pumpkin, and this summer we’ll have green beans, tomatoes, and so on. This all goes along with my philosophy. 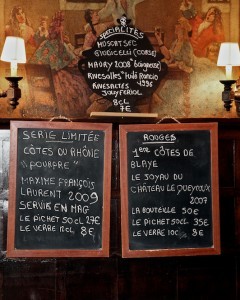 For example on the wine list there are only natural wines. The terrine molds we use come from Emile Henry, who makes them out of Burgundy clay. The sea scallops we serve come from Normandy – we know exactly where they come from, in fact we know the name of the boat!

We also know the name of the fisherman who catches the swordfish we buy – he’s off Saint-Jean-de-Luz, in the Basque country. We know which farm the pigs came from, we know where the eggs come from. At the moment our oranges come from Kalamata in Greece.

This quality control is part of our philosophy of respecting our clients. Over the years we have selected our suppliers ver carefully. For example, when people tell me, ‘We’d like a Côtes du Rhône,’ we don’t sell just any Côtes du Rhône, we sell Domaine Gramenon. We’re not vague.

Tell us about your cooking style. For example, your roasted sea scallops are delicious.

First, we cook a dish when people order it, not beforehand. So the scallops are raw. We cook them to order and serve them as soon as they’re ready. And then, roasted doesn’t mean we cook them in the oven — we grill them quickly in a pan, maybe 30 seconds a side, and finish up by adding a little butter to make a sauce. We keep the ‘beards’ — the gray outer edge that is normally discarded — to make broth for another use. 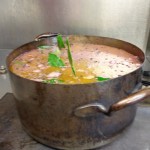 We follow the seasons. So in autumn we put game on the menu. In September the mushrooms haven’t come yet, but people are back from vacation and they’ve been eating tomatoes and zucchini all summer. When the game comes along, they love it. Certain types of game, for example hare and grouse, demand a lot of work. The game you see on most restaurant menus is venison or boar because there’s no work involved. You just cut a steak or make a stew. Skinning a hare, pluming a grouse – that’s work. But we’ve always done it, and people come for that reason. (At left, red wine sauce that will be served with game.) 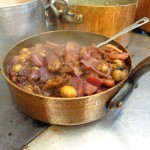 At the moment, with spring around the corner, we have lamb, and soon we’ll attack the asparagus, green and white, and everyone will be happy about it. We’ve made a reputation with game because few restaurants serve it anymore – because it’s too much work. When you look at most restaurant menus what they have to offer is simple meals like steak with French fries. When you start buying root vegetables, like Jerusalem artichokes for example, you have to peel them and work on them. The result is food that’s more original. (Above, a compote of beets, onions, chestnuts and red wine that will be served with fish.)

I’m convinced that your 18-euro lunch menu is one of the best deals in Paris. It’s not expensive and there’s always an interesting selection of dishes to choose from. How long have you been doing this?

It’s been a while. Nearly seven years. We don’t take reservations for that lunch menu, and the upstairs room where we serve it is always full. Most of the people who come are locals – they work or live in the neighborhood. I call it our ‘workers’ menu’ even though the people who come are pretty upscale workers, because the bill comes to 25 or 30 euros with wine, coffee and dessert. Still, some people come here everyday.

But do you break even?

It’s a matter of organization. No matter what I charge, I’m better off if I have plenty of customers. If I don’t have customers, I still have the same overhead – the same staff to pay, the same electricity bill, the same gas bill for the ovens. The place needs to be full. I’ve bought the food, the cooks are here, everything’s here. 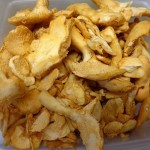 And the bottom line, which people have taken on board, is that we put fresh vegetables on the menu. Despite popular belief, vegetables are expensive. But we’re serving them. When we put foie gras on the 18-euro menu at Christmas time it’s because people like it. (At right, pied de mouton mushrooms, which are apparently known in English as wood hedgehogs.)

It’s the same thing as the philosophy of bread. In some restaurants, they take the view: ‘I won’t buy good bread because if I do people will eat it. I’ll buy lousy bread and that way people won’t eat it and maybe they’ll order something else.’ But people don’t come if the bread’s no good. Bread is expensive, but we use top quality bread.

And where do you buy your bread?

The bread that’s on the table at the start of the meal is Pain Poujauran, from a baker in the 7th arrondissement who sells only to restaurants. And the baguette is from Thierry Breton, a baker near the Gare du Nord.

Monsieur Paquin, what made you decide to become a cook? 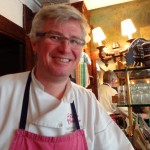 I’m a farmer’s son, the oldest boy in a family of six kids. I started cooking when I realized I’d rather be in the kitchen, where it’s warm, than outside in the cold milking cows. We were a big family, and there were always a couple of farmhands to feed as well. Every day there were 10 of us around the table. I gave my mother a hand. When I left home, I went to hotel school for seven years, then worked a year each in Lausanne, Montargis and Lyon.

What made you decide to come to Paris?

A friend told me, ‘The advantage in Paris is that you don’t need to have crystal glasses and linens on the table. If the food is good, everyone will come eat at your place.’ And I discovered that was true. In the country, if you use paper tablecloths people will think your place is a truckstop with lousy food, even if it’s good. In Paris people don’t care about that. 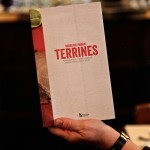 You’ve just published a book, called ‘Terrines.’ How is it doing?

The book came out in October — they published 7,500 copies — and now we’re waiting for them to finish the second print run. It’s already out of stock in bookstores. A lot of people are stopping by here to buy a copy.

And how did you come to specialize in terrines?

In the culture of the French countryside, the terrine has always had a major place. We killed the pig, and making a terrine was a way to use the liver and offal — otherwise, what would we have done with them? So I just continued this tradition as a chef. When I came to Paris I started being a bit more inventive with my terrines. So, for example, I created a terrine of chicken liver with rum and raisins that was very popular, then another one with lamb’s liver, figs, cumin and Boukha, a strong eau de vie made of figs.

There’s always a story attached to a new terrine. One time I had a cook who was a Muslim, and of course he didn’t eat pork. So I created a terrine using calf’s liver and veal. After all, the word terrine is the name of the baking dish, which is made of clay, or terre in French. You can put anything you want into it. 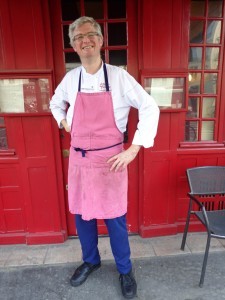 Yes. Respect products of the season and the region. This morning we took an onion, a piece of butter, a slice of bacon and a head of cabbage, and with this we’re making soup. We will cook it for two hours, then tomorrow we’ll blend it and add some cream or olive oil. We’ll sprinkle some crumbled walnuts on top, and that’s it. We’ve got a soup that costs one euro to make, and that respects the environment. Your readers can do the same. That’s my message.

For more about Rodolphe Paquin, go to Paris Update, a weekly review of what’s hot in town, where he talks about some of his favorite things.

— If you’d like to try making one of Rodolphe Paquin’s dishes at home, his creamy lentil soup recipe is one of the most popular pages on this site.

Rodolphe Paquin is the chef at: 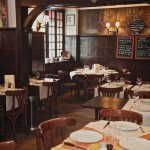