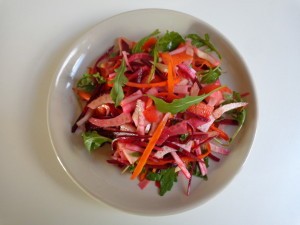 This salad, composed of veggies that grow underground, is the perfect example of a dish where you can use your imagination. If some of the ingredients listed below are not available where you live, you can leave them out — or substitute something else. Radishes, for example. One version I tried included zucchini, a distinctly above-ground vegetable. Or you could replace the celeriac with celery.

I would, however, recommended including the raw beets — which are are notoriously difficult to find in France. They usually appear for sale precooked. But it’s possible to find them raw at outdoor markets and at fine green-grocers. And it’s worth the effort, because they lend a lovely (almost fluorescent) red glow to the salad.

If you choose to leave out the beets, you can give this salad an Indian touch by using a variation on the main recipe, explained below.

I owe the inspiration for this earthy salad to my Parisian friend Jocelyne and to the menu of a restaurant in San Diego, La Buona Forchetta.

Cut the lemon in half and squeeze through a sieve into a salad bowl.

Peel the carrot, cut in half lengthwise and slice into thin strips using a vegetable peeler. This is a little tricky, and there will be bits of the carrot too thin to slice into ribbons. Slice those bits into fine julienne (matchstick) strips. Add the carrot to the bowl and toss.

Rinse the finocchio, chop off the bottom and green bits at the top, cut in half and slice crosswise into very thin strips. Add to the bowl and toss.

Peel the turnip or parsnip and cut in half lengthwise. Reserve one half for another use. Slice the other half very finely, then turn it on its side and slice again to create matchstick strips. Add to the bowl and toss.

Remove the top and bottom of the celeriac. Cut in quarters and reserve three quarters for another use. Peel the remaining quarter, cutting away all of the brown exterior. This is best achieved using a strong, sharp knife. Slice the remainder into matchstick strips, using the same method as for the turnip or parsnip. Add to the bowl and toss.

Peel the beet, cut in half and slice into matchstick strips, using the same method as for the turnip or parsnip. Add to the bowl and toss.

Peel the garlic, mince very finely and add to the bowl. Toss.

Add the olive oil. Season with salt and pepper and toss. Taste to adjust the seasonings as necessary.

Just before serving, rinse the arugula, spin dry, add to the bowl and toss. Serve on individual plates. Serves 4. 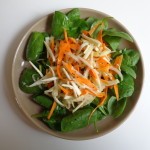 For an Indian variation, use only 2 tbsp. olive oil when you prepare the salad. Just before serving, heat 2 tbsp. vegetable oil (sunflower, safflower, peanut) to sizzling in a small saucepan. Add 1 tsp. black or brown mustard seeds. Cook until the seeds begin to pop — about 10 seconds. Pour the hot oil and seeds over the salad and serve immediately.