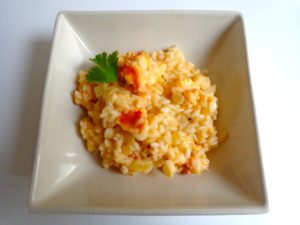 This is a standard risotto that becomes very special thanks to the addition of succulent chunks of lobster. It is simple to prepare, but you need to leave time to make a broth with the lobster shells. Total cooking time is about an hour.

The quantities below will serve three people as a starter, or two as a main course.

Bring large a pot of salted water to a boil.

Cook the lobster until the shells turn red and the flesh is no longer translucent. The cooking time is 10-15 minutes, depending on the size of the tails. Do not overcook, as the lobster will cook a bit more when it is added to the risotto. Skim off the foam that forms while the lobster is cooking. When the lobster is done, turn off the heat and remove it, leaving the cooking water in the pot.

If using whole lobster, separate the tail from the rest of the body.

Place the tails flat-side up on a cutting board. Using a sharp, sturdy knife, cut vertically through the tails. Use a spoon to scoop out the meat. Set aside.

Return the empty shells to the pot with the cooking water. Peel an onion, cut in half and add one half to the pot. Add a bay leaf. Bring to a simmer and cook for about half an hour.

While the broth is cooking, prepare the other ingredients for the risotto. Chop the lobster meat into bite-size chunks. Finely mince the remaining onion half. Measure out the white wine and the rice. If using parmesan, grate it now.

When the broth is done, strain it through a sieve into a clean pot. Place over low heat.

Now make the risotto. Spoon the olive oil into a heavy-bottomed saucepan. Place it over medium-high heat. When the oil sizzles, add the minced onions. Sauté, stirring, until the onions are translucent, about one minute. Add the rice and stir occasionally until it turns translucent, about one minute more. Add the white wine and stir until it evaporates.

Now add 1-1/2 cup of the warm lobster broth. Stir in 1 tsp. tomato paste. Cover the pot, turn the heat down to low and cook until most of the liquid has evaporated, about 15 minutes. Check frequently to ensure that there is still liquid in the pot. When the rice appears to be done, taste a grain — it should be al dente, i.e. still a bit firm in the center.

Add a couple more spoonfuls of broth to the pot. Add the lobster chunks. Stir in the butter. If using parmesan, add it now. Cover the pot and allow the risotto to cook for another couple of minutes to absorb the flavors.

Serve piping hot in individual shallow bowls or on plates, perhaps accompanied by a salad of tender leaves like mesclun or arugula. Garnish with fresh herbs. Serves 2-3.

If the risotto is a main course, you could begin the meal with a Mediterranean style starter like tapenade or thinly sliced Parma ham. If the risotto is a starter, you could follow with any fish, poultry or meat dish, providing it’s not too rich. Suggestions could include pan-seared cod, chicken with honey and thyme, or roast pork with rosemary.