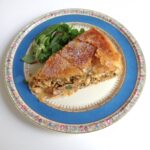 Pastilla, a splendid savory pie, is worth a thought for a festive dinner as we gallop toward the holiday season. Crisp pastry encases chicken and almonds simmered to melt-in-your-mouth tenderness in exotic spices. The pie is sprinkled with powdered sugar to lend a seductive sweetness that will have your guests asking for more. But beware — making pastilla is a bit of a production. In other words, this is not an everyday dish

Pastilla came to France via Morocco and is thought to have roots in Spain. In her Book of Jewish Food, Claudia Roden says, “There is a belief among the Jews of Morocco that their ancestors were responsible for bringing the country’s great festive pie from Andalusia.”

I had made it before, and was inspired to try again recently when my downstairs neighbor Manuela brought me a slice of pastilla she’d made while experimenting with filo pastry. When I reheated this treat and tasted a bite, I nearly fell over. It was fabulous, out of this world. I phoned her up and demanded to see the recipe.

I nearly fell over again when she showed me the recipe she’d used, from Nopi: The Cookbook by Yotam Ottolenghi and Ramael Scully, named for their eponymous restaurant in London. To say their approach was unorthodox is an understatement. Their version contains many ingredients not generally found in pastilla, from spinach, red currants and chocolate (!) to cognac and wine — these last two being particularly unusual in a dish emanating from a Muslim country. But I couldn’t argue with the results — Manuela’s pie was fantastic. Still, I decided to go with a more traditional version for this post. 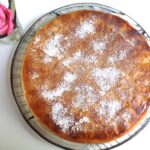 Pastilla was traditionally made with pigeon, but these days chicken is generally used. In France, pastilla is often served as small individual pies. But for a festive occasion like Christmas, New Year’s or Hanukah, a large pie makes an impressive presentation. One pie will serve 10 as a starter or 6-8 as a main dish. Preparation takes several hours, but if you’ve got the time and the patience, it’s well worth the effort.

In my next post, I’ll offer a recipe for what I hope will be a spectacular holiday dessert (if it turns out well). Hint: it’s not exactly a Yule log, but it’s close.

This entry was posted in 4a. Savory Tarts and Tartines and tagged Christmas, New Year's, pastilla, recette, recipe. Bookmark the permalink.