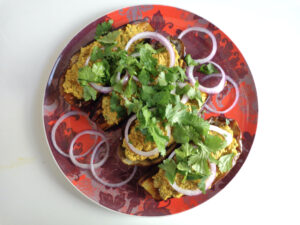 This dish hails from Georgia, a land with one of the world’s greatest cuisines. Not the state, but the former Soviet republic nestled in the Caucasus mountains. Its people are among the longest lived on earth, certainly due in part to their healthy culinary traditions.

In this version, the eggplant is baked, not fried, producing a lighter dish. Walnuts are ground with garlic and cilantro, then flavored with ground coriander seeds, red wine vinegar and cayenne. A sprinkling of finely chopped celery adds crunch. Spread the sauce over the golden eggplant, top with cilantro and red onion rings, and you have a dish both tangy and comforting. Serve as a starter, a side dish or part of a mezze spread.

The quantities below will serve 4 people.

Rinse and dry the eggplant, remove the tops and slice in half lengthwise. Score the flesh in a crisscross pattern. Be careful not to slice into the skin.

Spread 2 tbsp. olive oil over the surface of a baking pan large enough to receive the four eggplant halves. Place the eggplant in the pan flesh side down.

When the oven is hot, bake the eggplant for 20 minutes. Remove from the oven. Drizzle with 1 tbsp. olive oil, then turn the halves over, flesh side up. Bake for 20 minutes more. As soon as the eggplant come out of the oven, sprinkle lightly with salt.

While the eggplant is baking, make the walnut topping.

Transfer to a bowl. Add the vinegar, 1 tsp. olive oil and 3 tbsp. water. Stir. Add the ground coriander seeds. (For best results, grind the coriander seeds yourself. This is easily done in a coffee grinder.) Now add the cayenne, minced celery and 1/2 tsp. salt. Stir to blend well. The sauce should be creamy. If it seems too dry, add another tbsp. water. Set aside.

Allow the eggplant to cool thoroughly, then spread with the walnut sauce and transfer to a serving plate. Refrigerate for at least two hours to allow the flavors to blend.

Allow the eggplant to return to room temperature before serving.

Transfer the eggplant to a serving plate. Top with the cilantro and onion rings. For an authentic touch, sprinkle the serving plate with pomegranate seeds. Serves 4.