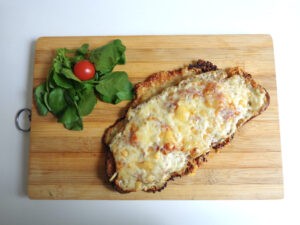 This classic French café sandwich can easily be made at home. In this rustic open-faced version, a toasted slice of country bread is layered with ham, béchamel sauce and grated cheese, and then baked until the cheese is golden and bubbly. Served with a salad and/or French fries, and perhaps a glass of red, it makes a delightful lunch.

The key ingredient that sets the croque-monsieur apart from other grilled ham-and-cheese sandwiches is the béchamel (white sauce), which lends a slightly sinful unctuousness that is just unbeatable. It’s an easy sauce to make — it takes just five minutes — and in this version is enhanced with garlic and nutmeg. A pinch of cayenne is optional. 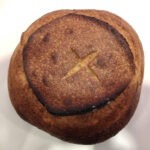 The bread you choose will be another key to your success. French country bread is a large round loaf that is typically made with sourdough leavening and a mix of white and whole wheat flour. It is available virtually everywhere in France, but the quality varies widely. Pain Poilâne, which is available in France and London, is often used. Elsewhere choose a sourdough loaf or just use your favorite bread, preferably with a shape that will make large slices.

Baked ham is traditional in a croque, but if you prefer prosciutto-style cured ham, that is excellent as well. And as for the cheese, go for Comté, Gruyère or a similar cheese. If French cheeses are not available, innovate with your favorite hard cheese.

One more variation: This sandwich is often proposed in cafés with a fried egg on top, in which case it is known as a ‘croque-madame’. (Why? Nobody knows.) If you’d like to serve it that way, fry the eggs while the croques are in the oven.

The quantities below will make two sandwiches.

Melt 1 tbsp. butter in a saucepan over medium heat. When it bubbles, add the flour. Stir with a wooden spoon to blend, then allow to simmer gently over low heat for about one minute to cook the flour while ensuring it doesn’t brown.

Add the milk, turn up the heat and stir until the sauce thickens, about one minute. Remove from heat. Add the salt, pepper and nutmeg, and the cayenne if using. Stir.

Peel and halve the garlic. Insert the halves in the sauce (you will remove them later).

Grate the cheese, using the larger holes of your grater.

Lightly butter one side of the toasted bread. Layer on the ham, cutting or folding it to fit the size of the bread — two slices of ham (or more) for each slice of bread.

Remove the garlic from the béchamel. Spread the sauce thickly over the ham.

Sprinkle the grated cheese over the béchamel.

Transfer the sandwiches to a baking sheet lined with parchment paper.

Bake for 10-15 minutes, until the cheese is golden and bubbly. Serves 2.