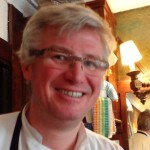 When Rodolphe Paquin took over 16 years ago as chef at the Paris restaurant Le Repaire de Cartouche, the place was in a shambles. Which is a shame, if only because of the restaurant’s unique frescos depicting the life of Cartouche, an 18th century brigand and ladies’ man who hid out locally — yes, repaired — while seeking to evade the police (who eventually caught up with him and executed him on the rack when he was just 28). Paquin’s genius was not just to save the place, but to tap into his Normandy roots to introduce a creative culinary style based on ultrafresh products from the sea and the forest.

Rodolphe Paquin / A chef in Paris

This was a very good thing for me because Le Repaire de Cartouche is in my neighborhood, in the 11th arrondissement just down the boulevard from the Bastille. I love the place, which — despite earning the occasional testy online review — has never disappointed me. The seafood is sublime, game of all sorts is on the menu throughout the fall/winter season, natural wines are featured and the desserts are heavenly. Reason enough to choose Paquin as the second to be featured in this site’s series of interviews with our favorite Paris chefs. The Everyday French Chef will be back on Tuesday with a new recipe. In the meantime, happy reading.