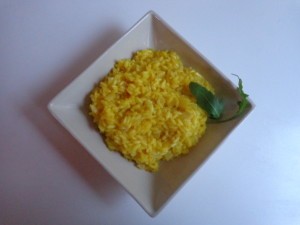 This recipe is quick and easy, and (shh, don’t tell anyone) it can be made in advance, as explained below. Be sure to have the broth ready before you begin cooking the risotto. Vegetarians may substitute homemade vegetable broth for the chicken broth.

Using risotto rice from Italy is key to achieving success. This recipe will not work with standard types of rice, which have less starch and do not produce the creamy dish we are aiming for.

I prefer powdered saffron, but saffron filaments are also fine. This recipe is my version of a classic risotto from Milan. The main difference is that the broth is added all at once, instead of by the ladleful. It’s far easier this way, and the result is just as delicious.

Peel and finely chop the onion. Put the broth over a medium flame and bring to a simmer. Leave this pot on the heat while you proceed with the recipe.

In a separate, heavy-bottomed pot with a cover, heat the olive oil to sizzling. Add the minced onion. Turn down the heat to medium-high and cook until wilted, about 1 minute, stirring frequently. Do not let the onion brown.

Add the rice and stir-fry until it turns translucent, about 1 minute. Add the white wine and cook until it has been absorbed. This goes very quickly. Stir to ensure the rice doesn’t stick.

Add the broth to the rice. Stir well. Add the saffron, stir again,  turn down the heat, cover the pot, and simmer gently until almost all the liquid is absorbed, about 15 minutes.

Add the butter and parmesan. Stir well to mix. Taste and add the seasonings. You may not need to add much salt, because there is salt in both the broth and the parmesan. Taste again and adjust as necessary.

Turn off the heat, cover the pot and allow to rest for 2 minutes. Serves 2 as a main dish, 4 as a side dish.