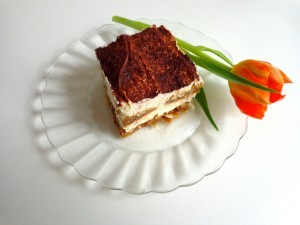 This dessert — in which creamy mascarpone is layered with ladyfingers dipped in coffee — is both fun to make and a crowd pleaser. It is relatively quick to assemble, but leave yourself plenty of time as it needs to chill for several hours.

Ladyfingers, as they are known in the United States, originally hail from Italy, where they are called savoiardi. They are called sponge fingers in Britain and boudoirs or biscuits à la cuillère in France. In the photo at right, the boudoirs are the thinner of the two French varieties, and I find they give the best results.

As for the other ingredients, get the freshest eggs possible, as the eggs are not cooked. For flavoring, I’d recommend vanilla if there will be children at your table. For a more sophisticated flavor, use grappa or the more traditional Marsala, a wine from the Sicilian town of the same name, just south of Trapani. 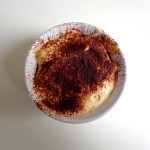 You will need a 1-quart (1-liter) pan with edges at least 2 inches (5 cm) deep. It will be easier to fit the ladyfingers into the pan if it is square or rectangular rather than round. You will probably have extra batter, in which case you can use it to make 2-4 individual portions in small soufflé cups, as explained below. The tiramisu may be made ahead of time and frozen. Take it out of the freezer about 2 hours before serving.

Have the eggs at room temperature before you begin.

Separate the eggs, placing the yolks in a large bowl and the whites in a medium bowl.

Give the yolks a quick stir with a fork or wire whip. Add the mascarpone, sugar and flavoring to the bowl. Set aside.

Beat the egg whites with an electric mixer until they form soft peaks. Set aside.

Now beat the mixture of yolks and mascarpone until very smooth. You can use the same beaters you used with the whites — no need to rinse.

Pour the coffee into a shallow bowl with a flat bottom.

Working quickly, dip both sides of a ladyfinger into the coffee. Place it on the bottom of your cake pan. Continue until you have lined the bottom of the pan with ladyfingers.

Spoon about half of the mascarpone mixture onto the layer of ladyfingers. Gently spread to cover the biscuits completely. 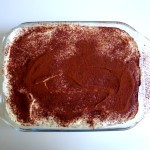 Measure the cocoa into a small bowl. Using a spoon, push it through a sieve to scatter it over the top layer of mascarpone.

You can make make individual portions of tiramisu using small soufflé molds. Simply break the ladyfingers into pieces before dipping in order to fit them into the molds.