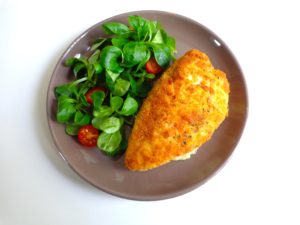 This dish of chicken wrapped around ham and melted cheese is a schoolkids’ favorite in France, and in fact will please the whole family. Do not be put off by the grandiose name — cordon bleu simply means ‘blue ribbon’ in French.

Preparation is simple. Chicken scallops are butterflied, flattened and lined with ham and Comté, Gruyère or a similar cheese. The chicken is then folded together, breaded, sautéed in butter and olive oil, and baked to cook it through and melt the cheese.

Baked ham is typically used in the children’s version of cordon bleu, but prosciutto or another cured ham will produce a more elegant, adult-friendly version. Bresaola or coppa may also be substituted for baked ham, and Reblochon or raclette for the Comté.

Serve the cordon bleu with a leafy salad alongside. The quantities below will serve 2.

To butterfly a chicken breast, place it on a cutting board. Holding a very sharp knife with the blade horizontal to the board, slice through it almost — but not quite — to the edge. This creates a hinge. Open the breast up into a heart-shaped form.

Using a rolling pin, flatten the chicken by pounding and rolling over it. Repeat with the second breast.

Cut the ham into pieces that will fit onto one half of each flattened breast, leaving a margin the width of a finger around the edge.

Slice the cheese thinly and pile it on top of the ham.

Crack the egg into a shallow bowl. Beat lightly with a fork. Using a pastry brush, paint a little of the egg over the margin of each breast. Fold the other half over and press the edges together to seal. Reserve the rest of the egg for later.

Dredge one breast with flour, dip into the egg to coat both sides, let the excess run off, and coat with breadcrumbs. Repeat.

Heat the olive oil and butter in a skillet over high heat. When it foams, add the chicken. Turn the heat down to medium and cook for about 5 minutes per side, until golden.

Transfer the chicken breasts to your baking pan. Bake for 10-15 minutes, until the cheese is bubbly.