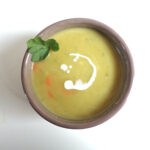 This is a French take on that cold-weather classic, split pea soup. A traditional dish in Alsace, where it is known as as erbsesupp, it has a smoky flavor, imparted by bacon, while a drizzle of cream lends a soothing touch. It’s hearty enough to stand on its own as a lunch dish, perhaps accompanied by melted cheese on toast or some cold cuts. And it can be made in less than an hour.

With Paris still partially locked down and under an evening curfew, I’ve found myself making a lot of soup recently. This plus my fireplace (more on that later) is helping me to survive solitude during a cold, wet season. It started with chicken soup at my daughter’s request. She came over to get some because she’d caught a cold (and, yes, it cured her). I went on to make a weird and wonderful Georgian soup called kharcho, which I hadn’t tasted since leaving Russia in the mid-90s. It’s a rich soup of beef, spices, sour plums or tamarind, walnuts and fresh herbs. I used the recipe from Anya von Bremzen’s Please to the Table — it’s not available online, but a blogger’s version of it can be consulted here.

Preparing kharcho is a bit of a production that starts with makng a big pot of beef broth. Once I had the broth, I got a sudden hankering for beef-barley soup, so I made that too. And with the chicken broth left over from my daughter’s soup, I improvised a pot of avgolemono, the Greek egg and lemon soup. Yes, this everyday French chef occasionally abandons local fare for dishes from other horizons. Dining table traveling, as it were.

Except that I haven’t been dining at the table, instead sitting beside an open fire in my apartment’s tiny fireplace. We’re allowed to have people over — before 8 p.m. when the curfew starts — so various friends have stopped by to lunch by the fire with me in recent weeks. But a few voiced concern: is a wood fire legal in Paris? Having just paid 85 euros to have my chimney swept, and with chimney sweeps doing a booming business here, I was convinced that it was. Further investigation confirmed that it is, although wood fires were banned in Paris for a couple of years (2013-15) in an effort to cut air pollution. Which is ironic because they have yet to ban cars in this fair city…

And so, mes amis, I’ll leave you with thoughts of warmth for the months ahead, via soup, cheery fires, a good book or good company. For all of us, let this be a good year.