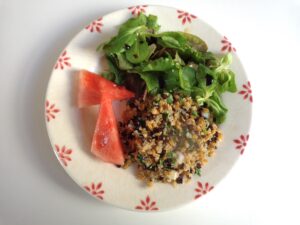 This healthy, rustic salad of grains and lentils is flavored with parsley, cilantro, shallot and ginger, and bathed in a sauce of sesame oil, soy and lemon juice, with a little hot pepper as an option. The salad makes a great hot-weather dish as it can be prepared well in advance and refrigerated. The combination of flavors is a knock-out.

I first had this salad while visiting friends in Provence, where the ancient grain known as petit épeautre, or einkorn wheat, is widely used in the local cuisine. The recipe also calls for quinoa and the small green lentils known here as lentilles vertes du Puy. These ingredients may be hard to find elsewhere, but not to worry – you can shop for them online or substitute bulghur for the épeautre and use whatever lentils are available.

The salad may be served as a first course; as part of a salad spread, for example with green bean salad, watermelon, mesclun and/or Greek salad; or as a side dish, with grilled meat, roast chicken, spicy sausages, poached salmon, smoked salmon, ratatouille, other veggies, whatever. A bottle of chilled rosé would go nicely.

The quantities below will serve 4-6 people.

Transfer the grains and lentils to a large bowl. Add the chopped herbs, shallot and ginger. Stir. Grind on some black pepper. Stir again.

Pour the sauce over the grains and stir.

If using the bird’s-eye pepper, mince it finely and add as much as you think your diners will appreciate.

Refrigerate the salad for at least half an hour to allow the flavors to blend. Serves 4-6.