This traditional and extremely popular dish hails from Savoy, a region of the Alps that crosses the boundaries of France, Italy and Switzerland. It consists of boiled potatoes covered in melted cheese, with cured meat and pickles on the side.

The cheese itself, now called raclette in French, takes its name from the way it was prepared in the old days, when a large wheel of cheese was held in front of a fire until it started to melt and was then scraped off with a scraper called a racle. 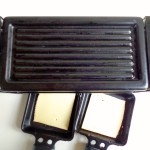 These days, the cheese is typically melted using an electric grill. Raclette machines come in all sizes, with a minimum of two small broiling trays for the cheese — but often more, as this is a dish that is perfect for conviviality. These machines are inexpensive and widely available in France. Elsewhere, you can melt the cheese in a gratin dish or pie pan. No problem.

Authentic raclette cheese is available in shops in France and can be ordered online elsewhere. In France it comes in packets, with the slices precut to fit in the raclette machine. The slices are about 1/5 inch (5 mm) thick and 3 inches (75 mm) square. If using a large piece of cheese, you can cut them to size yourself.

In the event you cannot find raclette cheese, substitute gruyère, comté or another similar cheese. The recipe would work with other cheeses, for example cheddar, but the taste experience would be entirely different, so I wouldn’t recommend it.

As for potatoes, choose a variety that not only holds together when boiled but also has good flavor. In France this would include Charlotte, Agate, Belle de Fontenay and Roseval, among others. Elsewhere, choose russet potatoes, preferably organic or heirloom. 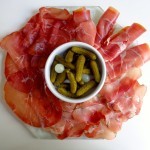 Raclette is traditionally served in France with tiny pickles (cornichons) and pickled pearl onions on the side, along with an assortment of cured meats — prosciutto, coppa, bresaola, etc. The pickles and meat can be presented on a platter in the center of the table. Diners help themselves, and take turns coating their piping hot potato halves with melted cheese.

It is traditional to drink white wine with raclette. The most typical variety is Fendant, a wine from the Swiss region of Valais made from the Chasselas grape. But this can be hard to find, even in Paris, and any fruity dry white is a good substitute.

Raclette is a meal in itself, but may be preceded or followed by a green salad. The quantities below are for four people.

Have the table set before you begin.

Rinse the potatoes but do not remove the peels. Place them in a large pot of cold water and set aside while you prepare the other ingredients.

If you have a raclette machine, simply arrange the sliced cheese on a platter and take it to the table. If not, place as many slices as will fit in a gratin dish or pie pan — or two dishes, to be placed in the oven one after the other.

Arrange the cured meat on a platter, with the dish of pickles in the center.

If serving a salad, prepare it now. Here’s a recipe for green salad, French style.

Now boil the potatoes until they are tender when pierced with a fork. Do not overcook.

When the potatoes are ready, drain well and bring them to the table in a large bowl, covered to keep warm while you melt the cheese. 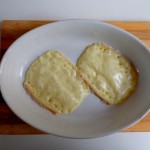 In the absence of a raclette machine, melt the cheese in the oven. This takes about 5 minutes. Bring it to the table when bubbly and have people help themselves with a spatula.

Otherwise fire up the raclette machine and call the diners to the table. While the cheese is melting, pass the platter of meat and pickles around.

Then let the fun begin. Each diner takes a potato, cuts it in half and bathes it in melted cheese. Prepare for applause. Serves 4.