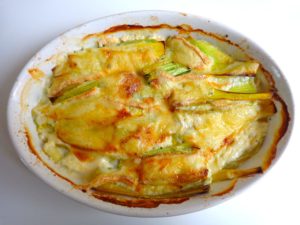 This easy dish is a crowd pleaser, so you may need to double the recipe. It is traditionally made with Reblochon, a pungent, semi-soft cheese from the French Alps. But other cheeses may be substituted with equally happy results.

Good choices would include any number of flavorful French cheeses —  Maroilles from the north, Munster from Alsace (not to be confused with the far milder American munster), or raclette or any gruyère-style cheese from the Swiss border area. Or you could go with Taleggio from Italy, Tilsiter from Germany or an aged Monterey Jack.

If using a semi-soft cheese, you can slice it. Otherwise grate the cheese, using the larger holes of your grater. Choose sturdy leeks if you can find them. The quantities below will serve 2-3 people as a side dish.

Put water in a steamer and set it over high heat. If you don’t have a steamer, put a pot of water on to boil.

Trim off the ends of the leeks and chop them into pieces about 3 inches (7 cm) long. When the steamer is releasing steam or the water is boiling, pop them in. They need to cook for about 5 minutes, until just barely tender.

Transfer the cooked leeks to a cutting board. When they are cool enough to handle, slice them in half vertically. Look at the pieces carefully, as leeks tend to be gritty. If you see any dirt inside, rinse it out under running water.

Cut the cheese into slices about 1/5 inch (5 mm) thick, or grate it if using a hard cheese.

Butter a small gratin dish or cake pan. Arrange the leek pieces cut side up. You will probably have more than one layer.

Spoon the cream mixture over the leeks. Then layer on the cheese.

Bake for about 30 minutes, until the cheese is bubbly and the leeks are starting to brown. Serve piping hot. Serves 2-3.