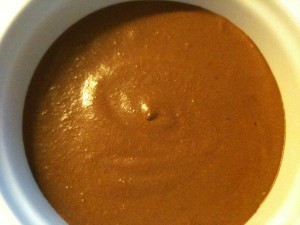 You will need 3 bowls for this recipe, two medium and one large, as well as a double boiler, a wire whip, an electric beater, a rubber spatula and a serving dish. As for the chocolate, the higher the quality, the better the mousse. But I’d recommend a chocolate content of no more than 70 percent — otherwise your mousse will not be sweet enough.

Separate the eggs, placing the yolks in a medium bowl and the whites in a large bowl. To avoid mishaps, separate them one by one over a glass before moving them into the bowls. That way, if a bit of yolk gets into one white, you will not have to jettison all the whites.

Whip the yolks with a wire whip until they are well blended. Set the whites aside for the moment.

Melt the chocolate in a double boiler over simmering water. While it is melting, pour the cream into the third bowl and whip until firm with your electric beater.

Remove the melted chocolate from the heat and allow to cool slightly (1 minute). Pour the chocolate into the yolks and mix quickly with your wire whip or a wooden spoon. Add the cognac. Mix in the whipped cream. The mixture should be smooth and satiny.

Now beat the whites with the electric mixer. Before beginning, have the 2 tbsp. sugar standing by in a little dish so that you can add it easily as you are beating. When the whites coalesce into a mass with soft peaks, add the sugar. Beat a little more, to medium-hard peaks, and stop.

Using a rubber spatula, gently fold the whites into the chocolate mixture. This takes some time because you want your mousse to remain light, but you also want to avoid having bits of the whites turning up in the midst of your chocolate creation. Be careful to fold, not stir — stirring will make the mixture collapse.

When the mixture is well blended, pour into a 1-liter (1-quart) serving dish, for example a soufflé dish, or into several individual dishes, and refrigerate until set, at least an hour. Serves 4-6.

* Brandy is an optional flavoring that enhances the dark chocolate flavor of the mousse. You may want to omit it if cooking for the younger set, or just according to your own taste. Possible substitutes include: 1 tbsp. strong black coffee, 1 tsp. vanilla extract, a little grated orange rind, ground coriander seeds — or use your imagination.