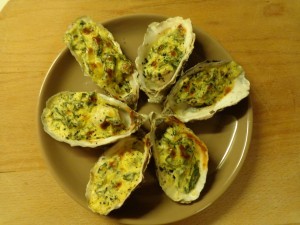 This recipe can serve up to six people. The question is when to serve it. One oyster apiece during cocktail hour makes a tantalizing start to a great meal — and won’t kill anyone’s appetite. Ditto two. Or you can serve 3 per person as a starter. Six is serious business, as they are quite rich. But why not? If the rest of the dinner is light, that can work.

There is no salt in this recipe because the oysters are salty from sea water. If you happen to have an open bottle of champagne handy, you can substitute that for the white wine.

Open the oysters or have them opened by your fishmonger. Discard the top half of each oyster shell.

Wash the spinach carefully and spin it dry. Using a scissors, snip it into fine ribbons. Place it in a saucepan over medium-high heat and cook until it wilts, about 3 minutes. You don’t need to add any water or oil to the pan — the droplets left from washing the spinach are sufficient. Set aside.

In a small saucepan, mix the egg yolk with the cream and the other ingredients. Set over medium heat and stir until the sauce thickens, about 3 minutes. Do not let it boil. Remove from heat and add the spinach.

Place the oysters in a baking pan — a cake or pie tin would be perfect. If you want to stabilize them, you can add a layer of sea salt to the pan and set the oysters on top, but this isn’t absolutely necessary. Spoon the sauce onto the oysters, using it all.

Place the oysters in the oven and bake 5 minutes. Turn on the broiler and place the oysters beneath for another 5 minutes, or until the top of the sauce is starting to brown. Serve immediately. Serves 1-6.