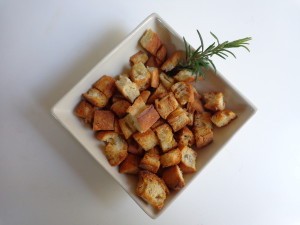 Are croutons French? In a word, yes. Croûton, a French word, derives from croûte, or ‘crust’ and means ‘the heel of a loaf of bread’. It often happened that this end piece was not eaten before drying out, and in a family that was not terribly frugal it could simply be discarded. But French country women and their urban sisters did not discard food easily in the old days. So they devised various ways to use their stale bread. And then embellished those ways.

In French cuisine, a crouton is often seen floating on a bowl of soup, with grated cheese scattered on top. This kind of crouton is sliced from a long loaf and toasted — it is oval, retaining the shape of the loaf. Examples are French onion soup, in which the rich oniony broth, with croutons and cheese on top, is baked in the oven — gratinéed. Another example is bouillabaisse, in which croutons are floated on the orange, fishy soup with a dollop of rouille — garlic-saffron mayonnaise — on top. And then there’s every other soup, for example puréed vegetable soup, where a crouton and possibly some fresh herbs are floated on top to provide body and flavor.

In France these days, croutons are seen just as often on salads — the bread is chopped into large cubes, drizzled with olive oil, and baked in the oven until toasted and golden. In this recipe, we add some herbs for a delightful burst of flavor.

As with all recipes, your success will depend on the quality of your ingredients. Go for a French-style baguette if possible, and if not choose bread from a good bakery, and not a pre-sliced store-bought loaf. The bread does not have to be dry before you start — you can hasten the process by cutting your cubes an hour or two before proceeding with the rest of the recipe — they will air-dry. As for the olive oil, go for extra virgin. For the herbs, this recipe uses rosemary, but thyme or oregano would also work well. 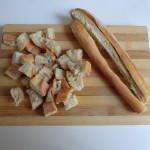 Cut the bread in half crosswise to make two manageable pieces. Slice each piece in half lengthwise. Then cut each half into strips. Now cut through the strips crosswise to form cubes about 3/4 inch (2 cm) per side, as shown at right. Important: Do not discard the crust! Remember, the crust is what gave croutons their name.

Place the cubes in a large pie tin for about an hour to allow them to dry out.

Transfer the cubes to a large bowl. Drizzle with the olive oil. Sprinkle with the herbs, salt and pepper. Toss, so that the cubes are evenly coated.

Transfer the cubes back to your pie tin. Bake 15-20 minutes, or until golden. This process can go very quickly — to prevent burning, which would ruin the croutons, peek into the oven after 10 minutes and keep checking frequently until they are done.

Allow the croutons to cool completely. If you don’t need all the croutons at once, you can store them in a covered plastic container in the fridge for up to a week. Simply reheat gently before serving. Serves 6.