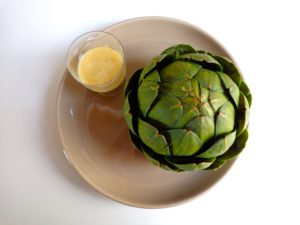 The fresher the artichokes, the better your chances of success with this classic French start to a meal. They are typically served one per person, accompanied by a small bowl of sauce. Mustard vinaigrette is the most traditional, but artichokes marry well with many other sauces, for example homemade mayonnaise, aïoli or a lemon-olive oil combo.

There are many ways to cook an artichoke — boiling, steaming, grilling. The advantage of boiling is that, if done properly, the artichokes retain a bright green color instead of fading to olive drab in the steamer. Follow the instructions below for happy results.

Pull off the small tough leaves near the base of each artichoke. Do not cut the stem. Break it off — this will draw out most of the tough fibers. Now slice through the stem with a sharp knife to create an even base.

Fill a large bowl with cold water. Cut the lemon in two and squeeze one half of it into the bowl through a sieve. Plunge the artichoke into the water, then turn it over so it is upside down. Set aside.

Fill a deep pot with water, add the salt and bring to a boil. Squeeze in the juice of the other half of the lemon. When the water is merrily boiling, add the artichokes. They will float to the surface. Turn them over so that they are upside down and cook for 10 minutes, then turn them right side up and cook for 15 minutes more.

When the artichokes are tender, drain them by placing them upside down in a colander. Allow to cool, at least briefly.

The artichokes should be served warm or at room temperature. If you prepare them in advance and refrigerate, be sure to remove them in time to let them warm up.

Serve each artichoke with a small bowl or cup of mustard vinaigrette on the side (or another sauce). Serves 2.

If a whole artichoke per person is too much, use halves. Pare as described above, slice lengthwise and cook in a steamer. This reduces the cooking time to 20 minutes.

For special occasions, snip off the tips of the leaves and slice off the crown of the artichokes before cooking. This creates an elegant look.

Some chefs then remove the interior bristles, or choke, and use the ‘cup’ created inside the artichoke to hold the sauce. But I wouldn’t recommend it. I find the artichokes tend to fall apart if the choke is removed.