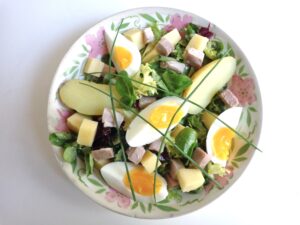 This very traditional salad is served in Paris bistros in countless variations. In this version, tender leaves bathed in a light mustard vinaigrette are topped with cubed ham, cubed cheese, potato halves and boiled egg. Other versions may include sliced raw mushrooms, green beans, tomatoes, croutons, pickles, anchovies, and the list goes on.

Until fairly recently, a salade parisienne was usually composed on a bed of Boston lettuce (laitue), but tastes have evolved. These days, a mix of baby greens is more popular — you could use a combination of lambs’ lettuce (mâche), arugula (roquette), baby spinach, curly endive (frisée), radicchio (trévise), and possibly some fresh herbs (chives, parsley, chervil). If you prefer to use lettuce, choose a tender variety (not iceberg).

For the cheese, you will need a small chunk of either Emmenthal (the most traditional), Comté (which I prefer), Gruyère or a similar variety. For the ham, a thick slice that you can cube works best, but you can also use thinly sliced ham cut into strips. In either case, go for baked or boiled ham (not dry-cured ham).

Serve this salad with crusty bread and, if serving wine, a fruity red such as a Beaujolais. For a vegetarian version, replace the ham with thinly sliced raw mushrooms, boiled green beans and/or halved cherry tomatoes. For a vegan version, omit the cheese as well.

The quantities below will serve two people for lunch or a light supper.

Place the eggs in cold water, bring to a boil and cook exactly five minutes. Tip the hot water out of the pot, fill with cold water, repeat. Let the eggs cool for easy peeling.

While the eggs and potatoes are cooking, cube the ham and cheese.

Now make your vinaigrette. In the bottom of a salad bowl, combine the mustard and vinegar. Add the oil one teaspoon at a time, stirring well each time to emulsify the sauce. Add the salt and pepper. Add the garlic halves (you will discard them before serving).

The recipe may be prepared in advance up to this point.

When ready to serve, remove the garlic, add the tender leaves to the salad bowl and toss with the sauce. Distribute the salad on individual plates or in shallow bowls.

Halve the potatoes and quarter the eggs. Distribute over the salad, along with the cubed ham and cheese. Top prettily with a few chives. Serves 2.