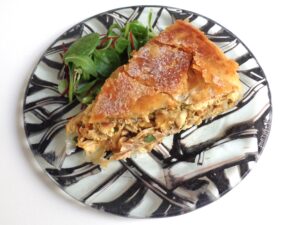 Making this splendid pie takes time and more than a little patience, but the result is worth the effort. Chicken is simmered with onions and exotic spices and then shredded, mixed with crushed almonds, encased in filo pastry and baked to produce a golden confection that is crisp on the outside and meltingly tender within.

The list of ingredients may appear daunting, but you probably already have most of the items on hand. If you can’t find powdered saffron, use saffron threads and soak them in a little water before adding to the sauce. The blanched almonds should be bought whole and roasted before being ground. And if you’ve never worked with filo pastry, it’s fun. Brushed with melted butter, the sheets crisp up beautifully to create the pie’s golden casing.

If you don’t have homemade chicken broth on hand, making it is the first step. See the recipe here. You will also need a 10-inch (26 cm) cake tin or pie pan for this recipe, as well as a pastry brush. The pastilla will serve 6-8 people as a main course, or 10 as a starter.

Peel and mince the onions and garlic.

Heat the olive oil and 1 tbsp. (15 g) butter together in a large skillet. When sizzling, add the chicken pieces, skin-side down. Brown for about five minutes, then flip and brown for five minutes more. Remove to a large bowl.

When the chicken comes out of the skillet, sauté the onions in the same pan. Cook at medium-high heat until the onions turn a deep golden brown. This takes about 20 minutes. Keep a close eye, as you don’t want them to burn.

When the onions are ready, turn down the heat and add the garlic, cinnamon, ginger, paprika, salt and pepper. Sauté briefly, stirring.

Transfer the onions to a large stew pot. To retrieve the last bits and the pan juices, add about half a cup (10 cl) water to the skillet, stir briefly and add to the stew pot. Add the chicken pieces and their juices. Add the broth. Place over high heat.

When the broth reaches a simmer, turn down the heat to medium. Add the saffron and honey. Stir to blend. Cover the pot and simmer for an hour.

While the chicken is simmering, roast the almonds. Preheat the oven to gas mark 6 (350 F, 180 C). Scatter the almonds in a large pie tin and roast for about 10 minutes, until golden brown. Be careful, as the roasting can go quickly and you don’t want the almonds to burn.

When the almonds are ready, set them aside to cool. Then chop them in a food processor. This is tricky, as you want the almonds to be chopped coarsely and not reduced to a powder. The best plan may be to do them in small batches, pulsing just a couple of times.

When the chicken has simmered for an hour, turn off the heat. At this point you can pause the recipe if you like, continuing later or the next day.

The next two steps — shredding the chicken and boiling down the onion sauce until it forms a thick syrup — each take about half an hour, and you can do them at the same time.

First, remove the chicken pieces to a colander. Rinse under cool water.

Next, heat the onion sauce in the stew pot to boiling. Stir. Turn the heat down a bit to ensure the sauce doesn’t burn.

Now you can return your attention to the chicken. Working one piece at a time, remove the skin, bones and any cartilege. Using your hands, shred the meat finely into a large bowl. This is actually quite a chore, so I suggest you put on some music you like before beginning. And/or pour yourself a glass of wine.

By the time you’re done shredding chicken, the sauce should be reduced to a thick syrup. Turn the heat down to low.

In a small bowl, whisk the eggs. Add a couple tablespoons of onion sauce to the beaten eggs to warm them, then pour the eggs into the stew pot, stirring vigorously to blend with the sauce. Add the chopped almonds and the shredded chicken. Stir. Turn off the heat.

Chop up the fresh cilantro and parsley, removing any thick stems. The quantity doesn’t have to be specific, but you are aiming for about a cup of each, loosely packed. Add to the chicken mixture. Stir. Cut the lemon in half and squeeze over the pot. Stir again.

You are now ready for the fun part — assembly.

Melt the remaining butter in a saucepan — about 5 tbsp. (75 g). Using your pastry brush, coat the bottom and sides of your baking pan with melted butter.

Place the filo sheets in a stack on a flat surface. Brush the top sheet with butter, and place in the baking pan, pressing it against the bottom and sides. There will be some overlap — just let the extra hang over the sides of the pan. Repeat until you’ve used 8 filo sheets, each time placing the sheet in a different position so that the overlap circles the pan.

Transfer the chicken mixture to the baking pan. Spread it out evenly.

Continue with the last 4 filo sheets, brushing them with butter but this time folding them and fitting the edges into the pan so there is no overlap. When you’ve added the last sheet, fold the overlap inwards. Brush the top of the pie generously with butter.

Bake for 25 minutes, or until lightly golden, then cover the pie loosely with a sheet of foil to ensure that the top doesn’t burn. Bake for another 10 minutes.

When you take the pie out of the oven, allow it to sit for 10 minutes before proceeding.

Place a large serving platter upside down over the pie. Invert and remove the pie pan. With a sharp knife, score the top of the pie in a diamond pattern. Cut through the top layer of pastry in 3 or 4 vertical lines, give the pie a one-third turn and cut 3 or 4 more lines.

Press the powdered sugar through a sieve to sprinkle it over the pastilla.

You can serve the pie immediately or reheat later. A salad of tender leaves would go nicely, as would a good bottle of red. Serves 6-8 as a main course, 10 as a starter.