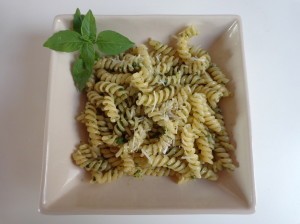 You can make this recipe with any kind of pasta, including spaghetti, but I prefer the spiral pasta known as girandole — torsades in French. This is because the indented curves allow the pasta to take up a good quantity of the pistou, a southern French version of pesto combining basil, garlic and olive oil.

The recipe below is for one — simply multiply the ingredients by the number of people at your table. If you don’t want to weigh the pasta, there’s an easier way to measure it. One coffee mug per person filled with dry pasta usually works out to be perfect.

By the way, be sure to read right to the end of this recipe because I am including a delightful pasta salad that may be made if you have leftovers.

Begin by making the pistou. Set aside.

Add the pasta and sea salt to the boiling water and cook as indicated on the packet. Drain.

Combine the pasta and pistou in a large mixing bowl. Stir well to coat the pasta with the basil sauce. Add salt and pepper to taste.

For a vegan version of this dish, simply omit the cheese. 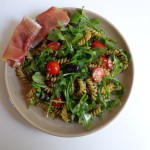 Combine any leftover pasta with snipped assorted greens — for example, as in the photo, arugula, basil and mint. Add some black olives and a handful of halved cherry tomatoes Add 1 tsp. balsamic vinegar and 2 tsp. olive oil for every cup of cooked pasta. Taste and adjust the seasonings. Serve this salad on its own or accompanied by dry-cured ham, with some crusty bread on the side.