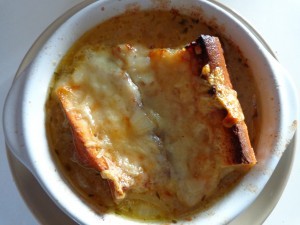 Use only homemade broth to make this classic of French cuisine — never a bouillon cube. The extra effort is well worth it. You can simplify matters by making the broth a day ahead of time while doing something else in the kitchen. Once you’ve put the broth ingredients into a soup pot — it only takes a couple of minutes — the cooking takes care of itself.

For a lighter onion soup, use only half the butter, or a combination of butter and olive oil. For a vegan version, use olive oil instead of the butter. Some French onion soup recipes (including Julia Child’s) call for adding cognac to the soup just before serving. I actually prefer it without — you can experiment to see which version you like best.

Peel the onions. Cut them in half lengthwise, then slice thinly crosswise to make half-rounds. 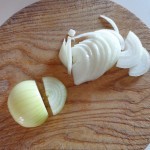 In a heavy-bottomed soup pot, heat the butter to sizzling. Sauté the onions in the butter over a medium flame until they begin to turn golden, about 15 minutes. You need to keep an eye on the onions during this process. Stir frequently, especially toward the end, to ensure they don’t cook too fast.

In a separate pot, place the broth over a medium flame and bring to a low simmer.

When the onions are golden, add the thyme — if using a branch of thyme, strip the leaves straight into the pot. Season with salt and pepper. Add the flour. Stir well and allow to cook for about a minute over a medium flame. Add the wine, scraping the bottom with a wooden spatula to incorporate any brown bits. Add the broth. Bring to a simmer.

Let the soup cook for about half an hour over a medium-low flame. It should remain at a low simmer without ever coming to a boil. 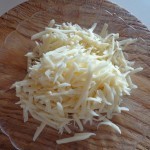 While the soup is cooking, grate the cheese, using the larger holes of your grater. Cut the bread into rounds or slices. Toast them.

When you are 20 minutes from summoning people to the table, preheat the oven to gas mark 8 (450 F, 230 C) or preheat your broiler. Ladle the hot soup into oven-proof bowls. Top with the toast and sprinkle generously with grated cheese.

Place the bowls on a baking sheet to catch any drips. Bake 10-15 minutes, or until the cheese is bubbly and starting to brown. Serves 4.