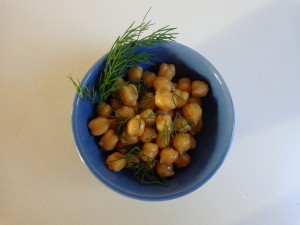 This is a great summer starter and it also makes a nice side dish for grilled meat or fish. The cumin adds a slightly exotic flavor with Middle Eastern overtones.

Place the chick peas in a bowl and pour the boiling water over them. Allow to swell for about an hour.

Now put a big pot of water on the stove to boil. Add the sea salt. Drain the chick peas and add them to the boiling water. Cook for an hour, or until the chick peas are just tender. Drain into a colander.

In a medium bowl, make a sauce of the lemon juice, olive oil, pepper and cumin. Taste and add more salt if necessary. Add the chick peas and chopped dill and stir. Serves 3-4.