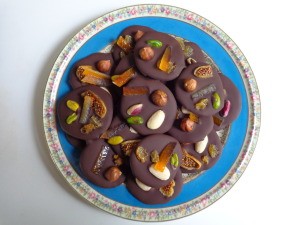 In France these chocolate confections are usually served around Christmas time — a colorful and festive way to finish a holiday meal. And preparing them is almost as much fun as eating them. It’s a family-friendly activity, where everyone can be creative.

Originally, the dessert called mendiants was an assortment of dried fruits and nuts representing the four French mendicant orders: almonds for the Carmelites, figs for the Franciscans, hazelnuts for the Augustins, and raisins for the Dominicans. Chocolate was not part of the picture. These days, though, it’s essential — and the key to success is using a very fine quality chocolate. I chose a dark chocolate with 70 percent cocoa content.

As for the nuts and fruits, the list has expanded over the years to include pistachios, candied orange peel, dried apricots, walnuts, dried cherries — or use your imagination. For this recipe I chose six varieties. The chocolate mendiants may be prepared in advance and stored in the fridge in an airtight container between layers of parchment paper.

This recipe makes about 30 mendiants. 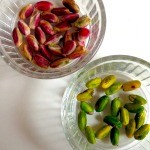 You may want to blanch some of the pistachios in order to obtain a bright green color. (At right, the pistachios with their red skins before blanching, and skins removed to reveal the green after blanching). Simply drop them into boiling water for about 30 seconds, drain through a strainer, allow to cool briefly and the peels should slip off easily.

Chop the figs and orange peel into small bite-sized pieces. 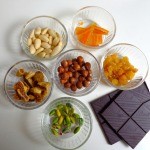 Place the nuts and fruits in small bowls for easy handling.

While the chocolate is melting, cover a couple of trays with sheets of parchment paper.

Using a soup spoon, drop the chocolate onto the parchment paper in rounds. They don’t need to be perfect — the variation is part of the beauty. I would suggest preparing six rounds at a time. Allow them to cool for about a minute and then place an assortment of fruit and nuts on each round. Repeat until you have used up all the chocolate.

Set the trays in a cool place to allow the chocolate to harden.

Remove the mendiants from the parchment paper using a spatula. You can store them until the holidays as described above, or arrange on a plate for immediate enjoyment.