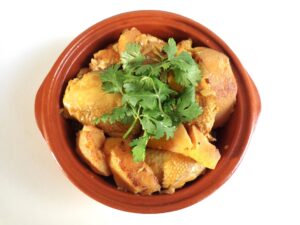 This richly spiced chicken dish is great in autumn, when quinces are in season. And if there are no quinces in your area, or if it’s not autumn, not to worry — you can substitute pears. The flavor won’t be identical, but the cooking process is the same.

For best results, use a free-range or organic chicken, and have the butcher cut it into pieces for you as described below. Alternatively, you could use four chicken legs instead of a whole chicken, and cut the thighs and drumsticks apart on your own. 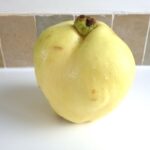 Now, regarding the quinces. If you’ve never encountered one before, a quince looks like a cross between a yellow apple and a pear — kind of pear shaped, but rounder. Other than its exquisitely delicate flavor, the main distinguishing feature is that even a ripe quince can be hard as a stone — you will need a very sharp knife to cut it into quarters and remove the core.

Serve the dish with rice or couscous, with a green salad alongside, perhaps dressed with balsamic vinaigrette. If it’s a festive meal, you can dress up the salad by adding pomegranate seeds or walnuts. Starters could include eggplant caviar, chicken liver pâté or a salad of beets and walnuts. And for dessert, perhaps pears in red wine and cassis.

This recipe will serve four to eight people depending on the appetites of those around your table. It can be prepared in advance and reheated just before serving. A full-bodied red, like a Côtes du Rhone, would go nicely.

In a large skillet, melt the olive oil over medium-high heat. When sizzling, add the chicken pieces, skin side down. Brown for about 5 minutes, then turn to brown the other side. When the chicken is nicely golden brown on all sides, transfer the pieces to a large stew pot, leaving the oil in the skillet.

Add the minced onions to the skillet and sauté over medium-high heat, stirring, until they have wilted. Add the cumin, cinnamon and crushed coriander seeds and stir-fry briefly with the onions, about 30 seconds. Quickly add one cup (20 cl) water. Stir, scraping the bottom of the skillet to incorporate the spices in the liquid. Transfer to the stew pot.

Place the pot over medium heat. Add the rest of the water — 4 cups (1 liter), or more if necessary to cover the chicken. Stir in the saffron, honey, salt and black pepper. If using cayenne, add it now. Bring to a simmer, then turn down the heat to medium-low. Cover the pot, leaving the lid slightly ajar to allow steam to escape, and cook for 30 minutes.

While the chicken is cooking, prepare the quinces or pears. Chop into quarters (or eighths if they are large), peel and remove the cores.

Melt the butter to sizzling in a skillet — or, if you’re cooking for the Jewish holidays, substitute 1 tbsp. olive oil for the butter. Add the fruit pieces and sauté until golden on all sides, about 10 minutes. Keep a close eye on things to ensure the fruit doesn’t burn.

When the chicken has cooked for half an hour, add the fruit to the stew pot and continue cooking at a simmer, partially covered, for 30 minutes more.

Turn off the heat, taste the sauce and adjust the seasonings. Skim the fat from the surface. This is easier if you allow the pot to cool for a while, or refrigerate it if there’s time.

Reheat gently before serving. Transfer to a serving dish. Top with chopped parsley or cilantro. Serve piping hot with rice or couscous, accompanied by a green salad. Serves 4-8.