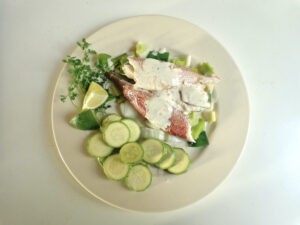 This recipe is theoretically for sea bream, but it can be used with pretty much any white-fleshed ocean fish that is not too big to fit into the oven — sea bass, porgy, red snapper, mullet, grouper, ocean perch or scrod, to name just a few.

The fish is served on a bed of steamed leeks, with a lime-flavored cream sauce on top. It goes well with steamed veggies, such as baby zucchini (courgettes), as in the photo. While the dish is light, you can make it even lighter by substituting light cream for heavy cream.

For best results, have the fishmonger gut and scale the fish for you — and of course, the fresher the fish, the better. The fish is baked whole (head attached) at a high temperature and filleted afterwards. This will ensure a moist, succulent interior.

The quantities below will serve two people.

Rinse the fish and dry thoroughly with paper towels. Remove any extraneous scales.

Cut one lime in half. Set aside one of the halves and chop the other into four pieces. Insert two pieces inside the cavity of each fish.

Before baking the fish, start preparing the leeks and the sauce.

Wash the leeks carefully to remove any sand, slice in half and chop crosswise. Set in a steamer over water — but wait to turn on the heat. (If making steamed veggies, you can steam them along with the leeks. Prepare them now and add to the steamer.)

Pour the cream into a small saucepan. Grate the peel of the second lime and add to the cream. Cut this lime in half. Squeeze in the juice of one of the halves. Add a pinch of salt and grind in some black pepper. Stir.

When the oven is hot, put the fish in to bake. It takes around 15-20 minutes, depending on the size of the fish. The fish is done when the flesh is no longer translucent. You can check by inserting a knife in the cavity and carefully lifting the flesh above the spine.

When the fish is nearly done, set the steamer over high heat and steam for 5 minutes.

Place the sauce over low heat.

When the fish is done, lift out the fillets: Slice into the top side of the fish along the backbone, head to tail. Gently lift off two fillets. Lift out and discard the bones. Slice the bottom side of the fish in half for two more fillets (four fillets per fish).

Form a bed of leeks on each plate. Set the fillets on top. Spoon on some sauce. Using the ungrated half-lime you set aside, cut it in half again to garnish the plates. Serves 2.