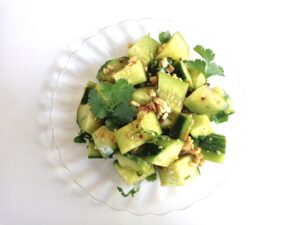 This flavor-packed salad from China’s Sichuan province has become popular in Paris over the last ten years or so. The salad consists of chopped cucumbers bathed in a sauce of soy, sesame oil, vinegar and garlic and topped with crushed peanuts and fresh cilantro. Two kinds of pepper add zing — cayenne and Sichuan peppercorn. 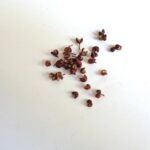 You can make the salad as fiery, or not, as you like. The fire comes from the cayenne, so you can add less or more according to taste. Sichuan peppercorn, on the other hand, produces a numbing effect quite different from hot peppers. Its delicious flavor imbues this salad with a unique taste. If you haven’t encountered it before, it looks like tiny dried berries, as shown at right.

For best results, buy your Sichuan peppercorn and the other Chinese ingredients from an Asian grocery. Gourmet shops also sell Sichuan peppercorn, but the quality isn’t the same. Ditto sesame oil. As for the peanuts, buy shelled, peeled, roasted and salted peanuts — the kind you might serve during cocktail hour. For an extra burst of flavor, you can roast the peanuts a bit more before crushing them and adding them to the salad. 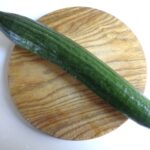 And how much cucumber to use? This depends on your appetite. I use one cucumber for two people. But a French cucumber, shown at left, is about 50 percent longer than cucumbers sold, for example, in the States. So you just need to use your judgment.

Preparation takes 15 minutes or less, and the components of the salad may be readied ahead of time, with everything combined at the last minute. The ingredients below will serve 2 people. 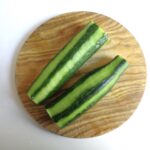 Rinse the cucumber. Using a vegetable peeler, peel off strips to create a striped effect. Then slice in quarters lengthwise and chop into bite-sized pieces. Do not salt the cucumber. Set aside (refrigerate if serving later).

In a salad bowl, combine the soy sauce, sesame oil and vinegar. Stir well to blend.

Peel and finely mince the garlic. Add to the sauce.

Crush the Sichuan peppercorn and cayenne. For this you can use a mortar and pestle. If you don’t have one, place the peppers on a paper towel, fold it over, and crush with the back of a spoon or the bottom of a knife. Add to the sauce. 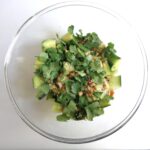 Now crush the peanuts. Place them on a flat cutting board and roll over them a few times with a rolling pin. Just before serving the salad, add the cucumbers to the sauce. Mix well. Add the crushed peanuts. Top with a few tablespoons of chopped fresh cilanto. Serves two.