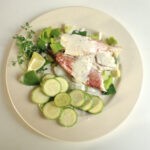 This is a fish story, the upshot of which is a dish of baked sea bream with a delicate lime-flavored sauce. It started two weeks ago when I went to the market and my fishmonger wasn’t there — he’d apparently gone on vacation during the French school holidays. So I wandered through the market and found another fish stand with a remarkably beautiful display. In the middle was a large red fish that looked like a giant goldfish.

The label said pagre, a member of the bream family that translates as red porgy. It’s a fish I associate with southern France as it’s often used in bouillabaisse — yet there it was in Paris. This was on a Thursday. I thought it looked perfect for a lunch I was planning for the following Monday, and decided to wait to buy it until the next market day, Sunday. But when I returned, alas, no pagre. Instead, there was a smaller pink fish labeled pageot. 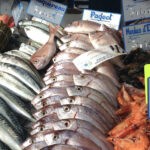 Although I had never encountered pageot before, I bought two, brought them home and looked it up: red sea bream. Fine. The next day I set to work for my guest. I coated the fish lightly with olive oil, inserted a couple of lime bits in the cavity and oven-baked it whole. While it was baking, I chopped and steamed a leek and made a sauce of cream, lime zest and lime juice. When the fish was done, I set it on a bed of leeks and drizzled it with the sauce. On the side I served steamed baby zucchini. My guest was delighted.

As I thought this would be a good recipe for the blog, I took some photos before serving the lunch. Alas, once again — the photos did not do justice to the dish. So the next Thursday I went back to the market, bought another pageot, came home, cooked it (just for me), took more photos and had it for lunch. And was not disappointed.

In fact, the discovery of this fish stand set me off on a cooking spree. Last Sunday I bought carrelet (plaice), a bottom-dwelling fish that, like sole and turbot, is dark on the upper side, in this case with red splotches, and white on the bottom side. I again had a lunch guest — this is allowed in France, while dinner with guests is impossible due to the 6 p.m. curfew — and we pan-fried it, served with small boiled potatoes and a watercress salad. I also bought bar de ligne (wild sea bass), which I served to my daughter the next day — oven-baked, with beurre blanc and a veggie medley of asparagus, peas and carrots. 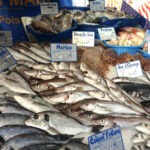 To give you an idea of the wealth of fish on offer at this stand, here’s another photo. On display in just this tiny corner of the stand are daurade royale (gilthead sea bream), merlan (whiting), limande sole (lemon sole), encornets (squid), seiche (cuttlefish), tourteaux (crab), praires (clams), rascasse (scorpion fish), colinot (hake), colinot friture (small hake for frying) and bar d’élevage (farmed sea bass). This is what makes it so delightful to be a culinary-minded person in Paris, even in a time of lockdown.

As we head towards spring, here’s hoping that you and your loved ones are well, and ready to enjoy the new season’s bounty that will soon bring pleasure to your table.

This entry was posted in 5. Fish and Shellfish and tagged lime sauce, pageot, recette, recipe, sea bream. Bookmark the permalink.