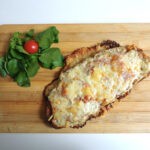 If you’ve ever been to Paris, you will most likely have encountered a croque-monsieur, the classic French grilled sandwich of ham, cheese and a creamy sauce. No one makes them at home because they’re served on virtually every street corner, at virtually every café. But with the cafés closed now and snow drifting down the other day, I decided to give it a go. And being in a non-traditional mood, I made an open-faced version on rustic country bread.

The traditional croque-monsieur consists of two slices of white bread filled with ham and cheese and topped with a béchamel sauce and more grated cheese. This one instead uses French-style country bread, a rustic loaf with a crisp crust and a tender, chewy interior. The slices are large, making for a generous sandwich. As there’s plenty of body in a single slice, I prefer to serve it open-faced — lighter and just as delicious.

According to the Grand Larousse gastronomique, the first croque-monsieur was served in 1910 at a café on the Boulevard des Capucines, near the Paris Opéra. But the esteemed encyclopedia of French cuisine does not say how the sandwich got its name.

Croque-monsieur translates literally as ‘bite the man’ (croquer means to bite into something, and monsieur is, well, what you call a man). One story goes that it got its name when the Boulevard des Capucines café owner, who was reputed to practice cannibalism, presented the sandwich to a customer and joked that it contained human flesh. But both this off-the-wall explanation and the account in the Larousse are proved false by the fact that the croque-monsieur was mentioned in periodicals well before 1910.

In 1891, for example, a sports publication called La Revue athlétique tells of a gathering when it is past lunchtime and the guests are hungry. One has an idea: ‘Let’s make croque-monsieur. Quick, bread for toasting, butter, Gruyère cheese, ham, a little cayenne pepper. One slices, the other butters and the third puts everything together in sandwiches that Vincent sautés in a pan. They’re exquisite, these croque-monsieur, perhaps a bit big, made for giant jaws, but no matter. We eat, we come back for more, we’re in ecstasy.’

I’ve quoted the whole passage, which I found on the French version of Wikipedia, both because it gives the original recipe — the croques were pan-fried, not grilled as today — and because it is so funny. Other 19th century publications mentioned the sandwich. Even Marcel Proust wrote about it in his masterwork, In Search of Lost Time. 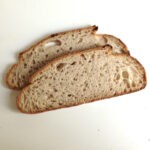 When I decided to make a croque, my first step was go down the street to a bakery called Dupain (Bread) that makes an exceptional miche, a large round loaf of mixed white and whole wheat flour with a sourdough leavening. The shop assistant told me that the flour comes from Gilles Matignon, a miller in the Gâtinais region south of Paris who grinds organic grain using traditional methods, a rarity these days.

Most cafés serving open-faced croques use pain Poîlane, a similar bread, which is available throughout France and also in London. Elsewhere, you can just use your favorite loaf, preferably one that will make large slices. And there is also room for improvisation in your choice of ham and cheese. Baked ham and Comté or Gruyère are traditional, but some cafés take liberties, using cured ham, goat or other cheeses, and sometimes adding anything from tomatoes or pesto to honey or bacon. And then there’s the croque-madame, with a fried egg on top. One can only speculate on how it got its name…

Personally, I prefer the more traditional variety, and I’d suggest you start with that, too. So when lunchtime rolls around, if you’re hungry and would like to experience a sandwich that at least once left its eaters in ecstasy, why not try your hand at a croque-monsieur?

This entry was posted in 4a. Savory Tarts and Tartines and tagged croque-monsieur, French sandwich, grilled ham and cheese, recette, recipe. Bookmark the permalink.