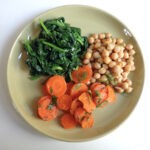 Baby spinach lightly sautéd in olive oil with garlic is one of my favorite ways of preparing this versatile veggie. Add a dash of lemon juice and you have a treat with a southern French edge. In northern France you’re more likely to find spinach prepared with cream or butter, the leaves most often served whole in a generous pile. I use spinach in maybe a dozen ways — in salads, in omelets, in savory tarts and as a side dish, as in the photo.

Yet until today this site has not included a recipe for cooked spinach — an anomaly that is now rectified. Spinach, a popular vegetable in France, has become much easier to prepare with the introduction by supermarkets of prewashed baby leaves. Sometimes I start with spinach straight from the garden, never mind the time it takes to wash away the sand clinging to the leaves and to trim away the thick stems. But often I opt for convenience.

After already writing up and photographing this week’s recipe, I was surprised last weekend to see a feature on spinach in the glossy weekend magazine of Le Monde. This most authoritative of French newspapers reported that spinach was unknown in Europe before the Middle Ages and arrived via Iran and Central Asia around the 12th century during the Crusades. It is considered a spring vegetable here, being most often planted in the autumn, but these days one can find it throughout the year.

Le Monde included some culinary suggestions: a salad of freshly picked young spinach with chopped spring onions, sliced apples and roasted hazelnuts in a lemony sauce; freshly squeezed spinach juice; spinach sautéd quickly with a lump of salted butter; or spinach-stuffed crepes. It noted that spinach historically was served during Lent in various forms, including preserved in clay pots — presumably a forerunner to canned spinach.

Ah, canned spinach. I remember it all too well. It was a dark gray-green and tasted of — well, I’d rather not go there. It’s understandable why this healthy, flavorful veggie acquired a bad rep for a time among children ordered to eat their spinach. In the postwar years, even Hollywood got into the act, summoning American kids to heed Popeye’s famous words: ‘I’m strong to the finish cause I eats me spinach…’

This entry was posted in 8. Vegetables and tagged é, spinach. Bookmark the permalink.