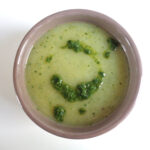 This zingy soup came about thanks to a visit I made to Provence last summer. While staying with friends in St-Rémy during a break between lockdowns, I came across an old cookbook of regional dishes and was intrigued to see a blended potato-leek soup that may be served cold or hot. It looked like something you’d expect to see further north — like a Provençal version of vichyssoise, in which the cream was replaced by pistou.

So this is a very different soup than its Provençal sibling, soupe au pistou, which is closer to minestrone with chunky veggies and pasta or beans. But the star ingredient in both is pistou — a blend of basil, garlic and olive oil, like Italy’s pesto minus the parmesan and pine nuts. As a big fan of pistou, I thought the soup sounded promising, so when I got back to Paris I made it. Good, but not great. So I tried again and improvised, adding zucchini to lighten the mix and add flavor. Success.

Served chilled and drizzled with extra pistou, this soup makes a delightful start to a summer meal. And if serving hot, you can bring a bowl of parmesan shavings to the table. They melt into the soup for an extra burst of flavor.

I’m writing this post from England, having come over as soon as the quarantine rules were lifted, and am having a fine time visiting friends and enjoying the local gastronomy. I’m also learning about conditions post-Brexit, some of which are affecting life in the kitchen. It turns out there’s a shortage of chicken due to the absence of the migrant workers who staffed the poultry farms over here. They’ve been sent back to Romania, Bulgaria, Poland and so on. The papers are also predicting a shortage of Christmas turkeys — a disaster given English traditions. And that’s not all. Lettuce is hard to find, presumably for the same reason, and friends report that shelves are bare in some supermarkets and pharmacies due to a lack of truck drivers, many of whom were also foreign.

The good news is that the British are continuing to produce local specialties that one can rarely enjoy in Paris. For example, a spread of potted brown shrimp and crabmeat, delicious on toast; baby peas in their tender pods served with aïoli; lightly spiced Cumberland sausages, quite different from French chipolatas; blackberry-plum cake, which would be impossible to make in France at the moment due to the absence from the market of blackberries; and fabulous local cheeses, such as Kingcott, a creamy blue with a light rind, and Winterdale Shaw, an aged hard cheese that is similar to cheddar.

Meantime I’ve updated the Menus section with everyday and weekend recipes for summer for omnivores, vegetarians and vegans. Enjoy, and see you in September.