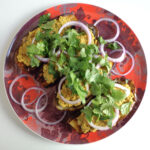 High summer is the time to make and enjoy this dish of roasted eggplant topped with a pungent walnut sauce. Traditionally served as a starter, it also makes a fine side dish or the star of a mezze spread. The walnuts are ground with garlic and fresh cilantro. Red wine vinegar and cayenne add tang, coriander seeds add spice, and celery adds a bit of crunch. It may not exactly be French — but it will have you saying ooh-là-là.

I’m posting this recipe in honor of my friend Beatrice, a wonderful cook and a lover of all things eggplant. Beatrice thought it might make an interesting addition to her culinary repertoire. As she already has a book of of 159 eggplant recipes — Essentially Eggplant, by Nina Kehayan — I couldn’t resist the challenge.

The dish is a specialty of Georgia that I first tasted in the ’80s while reporting from the USSR. The occasion was a visit by Margaret Thatcher to Tbilisi, the Georgian capital. I went along and was invited to a gala dinner. The food was spectacular and so was the ambiance — mustachioed men singing Georgian chants as we downed glass after glass of vodka. By the time we finished, everyone felt like dancing.

Thus began my love affair with Georgian cuisine. When I returned from Moscow to Paris, I looked for a Georgian restaurant and came up dry. So I learned to make Georgian dishes myself, helped by two cookbooks — Anya von Bremzen’s wonderful Please to the Table, and Dishes of the Georgian Cuisin (sic), which is basically a pamphlet printed on rough paper in three languages: Georgian, Russian and English.

My version differs from the classical recipe in that the eggplant halves are coated with olive oil and roasted, not fried. This makes for a lighter dish, which is appreciable in hot weather. Using eggplant straight off the vine, you will get a maximum of flavor with relatively little effort for a super healthy dish that is both vegetarian and vegan.

The dish would marry well with the other Georgian recipes on this site — red bean salad with walnuts, chicken with walnuts, green beans with walnuts — or with herbal tomato salad, white bean dip, pomegranate relish, or roasted meat or poultry.

Since last communicating with you I’ve spent a couple of weeks in California, where I had a wonderful time — and enjoyed foods not widely available in France. Sweet corn on the cob, barbecued ribs, lobster roll, a green enchilada (with salsa verde), a proper Caesar salad, my brother’s famous dal — a very nice change of menu. And I have to admit it was also very nice not to cook a single thing while on vacation.

But I’m back in the kitchen now, and have been assembling a line-up of dynamite recipes to post for you in the months ahead. On the list: from Provence, a savory tart with goat cheese, figs and rosemary; from Normandy, chicken cooked in cider and served in a creamy sauce; from Dordogne, a salad with country ham, green beans and foie gras; and from Burgundy, a home-bottled apéritif known as ratafia. At the moment, I’m also longing to make a blackberry tart, and if I can fit that in somewhere, I will.

So… watch this space. And happy cooking.