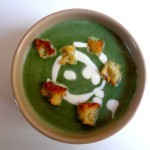 This summer I met a man on a beach named Popeye. Did he eat his spinach? I didn’t stick around long enough to find out — but if he did, he might have enjoyed this spinach soup topped with garlic cream and croutons. Fresh, healthy, with a zingy flavor, the soup is bound to send your energy soaring. Serve it by the fireside as the evenings grow cool, followed by a simple main dish or just cheese and crusty bread. And a bottle of hearty red, of course.

I’ve served this soup in many iterations, to generally enthusiastic reviews. For a more exotic flavor, you can grate in a little raw ginger or add a dash of ground cumin. For more bite, squeeze in some lemon juice. Or chop in some fresh herbs — for example, tarragon and chervil. For a richer soup, add more cream. For a more intense soup, add less.

Spinach was one of the few ingredients that did not figure on the menu when I had the pleasure last weekend of being invited to Spring, the restaurant of the Chicago-born Paris chef Daniel Rose. I’ve known Daniel since he was just starting out in the French capital with a smaller version of Spring hidden away in the 9th district. Now he has two places — the larger Spring near the Louvre where we dined, and a new bistro called La Bourse et La Vie that is located, not surprisingly, near La Bourse, the French stock exchange.

The new place is winning rave reviews. I have not yet been, but here is a sampling of the food on offer at Spring these days. It’s a five-course menu in which you not only have no choice, but are not even told what will be served before it arrives. (This can make choosing the wine rather difficult. More on that later.) So: Our first course was foie gras set on shredded apples and celery and topped with roasted hazelnuts and with a drizzle of something that tasted like raspberry (but I’m not sure, since we never saw a written course list). It made a great start to the meal.

Then came a salad of beets, both cooked and raw, with grapefruit pieces, a tiny bit of crab and a citrus vinaigrette. Next was monk fish in a lemongrass-flavored foam with a thin tiny square of crispy dried beef and a tiny purée of white beans. The meat course was a small piece of medium-rare veal with a porcini mushroom slice — yes, one slice — and a veggie which I’ve now forgotten, and then, to share, a dish of succulent porcinis (cèpes) and crisped veal sweetbreads for those who dared (I didn’t, but I heard they were good).

The dessert course was actually three desserts. We were told in which order to eat them: first the poached pear with balsamic whipped cream; then the plum tart; and finally — and this was my favorite dish of the evening — an intense mint granita set on a cookie base and topped with a very thin piece of very bitter chocolate. Wow!

There were downsides, and the first was the wine list. When we found the red bordeaux, my favorite wine, we had to look twice — there were only half a dozen, ranging from 400 to 900 euros a bottle. Don’t ask me the names. I was so taken aback that I simply turned the page. We asked the young sommelier about this, and he replied that he thought no bordeaux wines under that price were worth drinking so he didn’t stock them. My friends and I were put off by that snobby reply, especially given that Spring built its reputation on serving fabulous and creative food in a modest setting. Then, when we finally ordered some less pretentious wine, it arrived more than five minutes after the first course was set before us — definitely a no-no in any French restaurant.

But this did not dampen our enthusiasm for the food, which was superb if expensive (yes, Spring has raised its prices). The new bistro is reportedly more affordable, and perhaps a bit more congenial. I hope to try it soon.