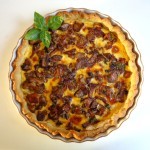 It’s mushroom hunting season in France, rather a dangerous sport as the hunting season for wild game is on as well. In my corner of Burgundy, men with guns have been out since September 21 hunting for pheasant, partridge, wild hare, deer and wild boar. Okay, maybe some women too, but it’s mainly men. That makes a trek into the forest to hunt for porcinis, which are abundant in the region, an outing that I, for one, prefer to avoid. 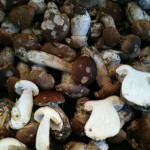 Thankfully, as I love wild mushrooms, they’re also abundantly available at French farmers’ markets at this time of year. Not just elegant porcinis (cèpes, at right), but also succulent golden chanterelles (girolles, below left) and oyster mushrooms (pleurotes). I’m not terribly familiar with the latter variety, but porcinis and chanterelles — don’t get me started.

In this recipe, those two varieties are sautéed in olive oil with a sprinkling of parsley and placed in a savory tart shell over a bed of lightly browned onions or shallots. They are covered with a mixture of cream and egg yolk, and the tart is baked until golden. 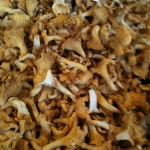 The aromas emanating from your kitchen may drive you mad, along with everyone else in the house, so one solution is to serve the tart straight out of the oven. But the tart may also be reheated and served later — as a main dish at lunchtime or a starter for a larger meal. In any event, it is a noble dish, deserving of a noble wine. Choose a dry red with enough body to stand up to the wild earthy flavor of the mushrooms.