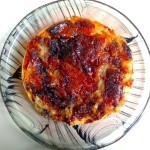 This classic French apple tart is said to have been invented about 130 years ago by two sisters, Stéphanie and Caroline Tatin, at the country inn they ran about 100 miles south of Paris. It’s an upside-down tart in which apples caramelized in butter and sugar are covered with dough. When the tart comes out of the oven, it is inverted, with the apples standing regally atop a tender crust. The dessert, allegedly created by accident, is one of France’s favorites.

According to the legend, Stéphanie (Fanny) was in a rush in the kitchen one day, possibly flustered by the attentions of a suitor (the inn was popular with hunters), and put a pan of apples, butter and sugar in the oven without a tart shell. When she realized her mistake, she quickly covered the apples with dough. She inverted the tart before serving it, and her creation proved a huge success. The rest, as they say, is history. Well, maybe.

As it happens, the Hotel Tatin is located in a small town south of Orléans in the Sologne region — where a dessert known as tarte solognote was popular at the time for miles around. It, too, was an upside-down apple tart. So who knows? Were the Tatin sisters geniuses of public relations, or did they really create something new?

Back to the legend: Word of the Tatin sisters’ dessert spread throughout the region and beyond, eventually reaching the owner of Maxim’s in Paris, Louis Vaudable, who came down and had a taste. According to one version, he was so smitten by the tart that he tried to get the secret recipe by getting himself hired by the Tatin sisters to do some gardening, but was found out. Nonetheless he put the dessert on the Maxim’s menu as Tarte des demoiselles Tatin. The problem with this story is that Louis Vaudable, born in 1902, was just four years old when the sisters closed their restaurant in 1906, and his family didn’t purchase Maxim’s until 1932. Never mind. Another famous French gourmet, Curnonsky, known as Le Prince des Gastronomes, popularized the tart when he included a recipe for it in a multivolume book on French cuisine. And the rest is truly history.

As for preparation of the tart, it’s a two-stage process that requires first caramelizing the apples and then baking them with the dough on top. The key is choosing apples that will hold together while cooking, and not turn into applesauce. I have included some apple varieties to choose from in the recipe.