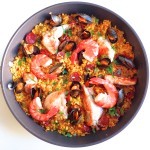 Paella, the immensely popular rice dish from Spain, crossed the border long ago to become one of the favorite dishes of France. It is particularly prevalent in areas north of the Pyrenées, where I had the good fortune to spend a little time this summer. Every bistro and its brother had one type of paella or another on offer — many featuring seafood, as we were by the sea north of Biarritz. One day I decided to make my own paella, using local ingredients.

It wasn’t the first time — I’d often made paella in Paris. But having access to ultra-fresh mussels, the long local green peppers, smoky chorizo and relatively inexpensive saffron gave it enough of a boost that I was asked to make it again before we headed north at the end of the summer. And now I’ve done it again in Paris, with equally satisfying results, in a version combining chicken, mild chorizo, mussels and large shrimp. It is fun to make, but there are certain tricks that will help ensure success.

First, choose an appropriate kind of rice — round, short-grained rice works best. If Spanish varieties are not available, you can substitute an Italian risotto rice with fine results. Also important is the sofrito, the mixture of tenderly sautéd minced onion, green pepper and garlic that will serve as the base for cooking the rice. Don’t be in a hurry with this — the flavors need time to blend. The rest of the recipe takes care of itself. The chorizo, rice, broth and saffron are added in successive stages. The chicken and seafood, cooked separately, are added at the end.

The wonderful cookbook Moro (Random House, 2001) explains that the Spanish often refer to paella style dishes simply as arroz, the Spanish word for rice. The word is of Arabic origin, for it was the Moors of North Africa who brought rice to Spain in the 8th century. They also brought saffron, a key ingredient. As for paella (pronounced pah-EL-ya or pah-AY-ya in Spain and pah-ay-LA in France), the word shares a root with the French word poêle and refers to the pan in which the is cooked.

There are, of course, many varieties of paella — with an emphasis on surf, turf or a combination. The modern version of the dish arose in Valencia and often features snails and white beans. Earlier versions featured eel and water voles, semi-aquatic rodents also known as water rats… In its paella section, Moro includes recipes for black rice flavored with squid ink, chicken paella with artichokes and sherry, pork paella with chorizo and spinach, and monkfish paella with saffron and fennel seeds.

One ingredient that’s difficult to find in France is smoked Spanish paprika, but this is not a problem if you can find a high-quality Spanish chorizo, which contains enough paprika to lend a delightful smoky flavor to your paella. In any event, this is a dish that cries out for creativity. If you don’t have one of the ingredients, substitute something else or simply leave it out. (The exception is saffron, which is absolutely essential.)

Paella is a great party dish, but it can also be made for just two. Serve it with a green salad and a bottle of wine — hearty red,  chilled white or rosé.