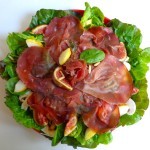 Late summer, when fruit is bountiful and ripely delicious, is the best time to make this salad of tender greens topped by fresh figs, pears, mushrooms, pine nuts and bresaola (Italian dried beef). The unusual combination is the brainchild of a friend of mine who happens to be a French ambassador, hence the salad’s name. A man not only extremely well traveled but also an excellent chef, he used his talent create this salad for guests recently.

The ambassador is Pierre Buhler, currently France’s top envoy to Poland. He previously served as ambassador to Singapore and has also held diplomatic positions in Washington, New York and Moscow (where we met many years ago), as well as serving as a senior analyst of strategic affairs at the Quai d’Orsay, the French Foreign Ministry here in Paris.

Pierre served this salad as the first course of a dinner for eight in Paris. The next courses, which he also prepared, were an Asian-inspired recipe for duck breast marinated in spices and a mirabelle tart emanating from his native Alsace. Fabulous!

The salad is significant enough to stand alone as the main course at lunchtime, followed by cheese and perhaps a dessert. Like all such creations, you can play with it, substituting Parma ham for the bresaola, for example, or using different types of late summer fruit. Pair the salad with a good bottle of wine — dare I suggest a fruity red? — and some crusty bread. You won’t go wrong.

Meantime I’d like to ask you, dear readers, for a little advice. I’ve been invited to speak on a panel in November at a gathering of luminaries from the French world of food. The topic: cultural differences in the art of entertaining. But it’s not about the food! Rather, the different forms hospitality takes in different countries. If you have ideas about this, and specifically what sets American hospitality apart, please let me know via a comment on this post or by writing to me using the site’s Contact form.

Thanks, and happy cooking!