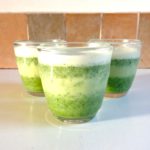 This fantastic recipe comes to me from Rodolphe Paquin, chef at the bistro Le Repaire de Cartouche down the street from me. Its genius is not just the use of garden clippings that are normally discarded, but also the addition of whipped cream, which turns the soup into a frothy confection. Serve it in small quantities as a dinner-party palate teaser before moving on to the first course. Or be totally decadent and make a pot of it just for yourself.

For the ecologically minded, it’s hard to imagine a better soup than this. The Rodolphe Paquin original uses carrot fronds, radish leaves, watercress or sorrel and fresh tarragon, along with whatever other greens he may have on hand. The greens are cooked in a gentle broth, with the whipped cream swirled in at the last minute. When I first tasted it, I had to have the recipe, and Monsieur Paquin, being a generous gent, was happy to oblige. I then served it at a dinner, and the guests virtually swooned in delight.

This is food from yesteryear, with a contemporary touch. Moving on, let’s consider the food of tomorrow. The international edition of The New York Times ran a special section on the subject this week, and I was so surprised by what I read in an article by Chris Horton that I’d like to pass it along.

Can you imagine that 3-D food printing is already underway? One machine on the market will produce a pizza ready for baking — all you need to do is to fill its capsules with the ingredients. A Spanish chef with two Michelin stars — Paco Pérez of Miramar in Llança near the Mediterranean coast, just a few miles south of the French border — is turning out quiche lorraine with another 3-D printer, known as the Foodini. The printers can create food tailored to an individual’s specific nutritional requirements or turn out pasta in shapes that cannot be made by hand. For the moment, all they apparently lack is an oven.

The article reported that 3-D garden farming, while still in development, is also on the way. A machine called the FarmBot will use a mechanical arm to plant, water and weed a small garden plot. This will be on my mind today when I head down to my garden in Burgundy, which hasn’t been tended much this year and is a mass of weeds. On the other hand, just as I doubt I’ll ever invest in a 3-D food printer — cooking is too much fun to relinquish to a machine — I don’t think I’ll be buying a farming robot anytime soon.

Getting my hands into the dirt and planting seeds that will turn into food is one of my great pleasures in life. Harvesting home-grown produce and bringing it to the table gives me such joy that I find myself thanking Mother Nature for her abundance as I sit down to eat. Forget about 3-D food printers. As we approach the Thanksgiving season, let us be thankful for the world as we know it, for the satisfaction we take in preparing delicious, healthy food in our home kitchens with our own hands. Food like an elegant, frothy soup of mixed garden greens.