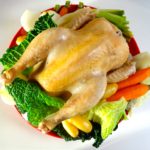 Every French school child learns that, back in around 1600, ‘good King Henri IV’ wanted to put a chicken in every pot. How much truth there is in this legend is still being debated by historians. What is incontestable, though, is that the dish called poule au pot to this day carries royal connotations. And yet, it is so simple. A chicken (or a hen) is boiled with vegetables to make a two-dish supper: first the soup, then the chicken and veggies.

Henri IV hailed from the Béarn region of southwest France, and this dish is sometimes served béarnaise style — stuffed with a mixture of cured ham, the bird’s liver and gizzard, bread, garlic, shallots, parsley and tarragon. I’ve done it that way, but it’s a lot more work and not really necessary as the dish is succulent enough without the stuffing. The vegetables are typically carrots, turnips, leeks, cabbage and potatoes. The chicken is cooked to total tenderness, creating a rich broth — even richer if the dish is made with a hen, which needs to cook longer.

Getting back to the legend, Henri IV is seen now as a ‘good’ king, but during his lifetime (1553-1610) he was a controversial ruler. Today he is remembered for having halted the Wars of Religion between Catholics and Protestants that had lasted for 40 years. In order to be crowned king of all France, the story goes, he converted to Catholicism, saying, ‘Paris is well worth a mass.’ He then issued the Edict of Nantes, which granted religious freedom to the Huguenots. He had plenty of enemies, however, and survived a couple of assassination attempts until he was finally murdered while stuck in a Paris traffic jam.

As for poule au pot, Henri IV is said to have remarked during a conversation with the Duke of Savoy, ‘If God keeps me in life, I will ensure there is no laborer in my realm who does not have the means to have a chicken in his pot.’ By ‘laborer’, he meant a peasant with a plow who could work the land (labourer) . This story was attributed to Henri IV years after his death, and nobody seems to know exactly when the conversation took place. Or indeed what was said. A version popularized in the 1800s has Henri IV saying that the French should be able to have chicken for dinner every Sunday.

And so a myth is born. When I first arrived to live in Paris in 1974, it did seem that roast chicken was the dish most often presented when I was invited to friends’ homes for Sunday lunch of dinner, usually surrounded by roasted potatoes. These days, that tradition is waning, and poule au pot is seen even less frequently, both in homes and at restaurants. But now that the days are growing colder, it’s a great time to revive this hearty, healthy, earthy dish.

This entry was posted in 6. Poultry and tagged chicken in a pot, henri iv, poule, recette, recipe. Bookmark the permalink.