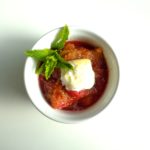 We’ve got one week left of spring, time enough to get creative with one of my favorite seasonal fruits — rhubarb. Well, to be exact, it’s a veggie, but for culinary purposes rhubarb stars in desserts. This simple, flavor-packed compote can be prepared in 15 minutes. I like to serve it with a dollop of something creamy on top, for example fromage blanc or Greek yogurt. Add a leaf of mint or a strawberry and it makes an elegant finale to any old meal.

As it happens, I served it last night, right after the cheese course. I’d brought a special cheese back to Paris from my country place in Burgundy — Le Petit Soumantrin. This cheese, somewhat like Epoisses, is very hard to find outside its region of production, and none of the guests at my table had ever seen it before. They finished it off, and while they were enjoying it the talk turned to President Charles de Gaulle.

‘How can you hope to govern a country that has 258 types of cheese?’ de Gaulle famously said (although in some versions of this quote the number is 246). Doesn’t matter. What the crusty president was saying, in effect, is that French cheeses are tied not just to national identity, but to the identity of regions or even villages, each with its own character. And how can you govern a country with 246 identities?

In any event, either General de Gaulle got it seriously wrong in terms of the number of different cheeses produced in France or that number has skyrocketed since he uttered his words on the subject in 1962. According to the web site of the French National Center for Dairy Products, that number now exceeds 1,200! Which means that you can try a different type of French cheese every day of the year for three years plus 105 days…

Getting back to rhubarb, a compote makes a light but satisfying ending to a meal, whether preceded by cheese or not. I have fond memories of this dish dating back to my childhood in Wisconsin, where my Aunt Marge grew rhubarb in her garden. 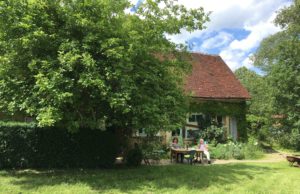 I also grew rhubarb at my country place, and as it is perennial the new owners will also enjoy it. Ah yes, my friends, I sold the dacha this week. It’s a major life change, but one that was necessary. I will miss my garden, but will look forward to creating dishes from all of the fabulous garden-grown fruits and veggies on offer in France.