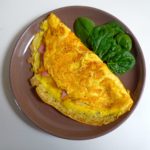 It’s lunchtime, a guest is coming, you’re in a rush. The omelette mixte is a classic of French cuisine that can be whipped up in just 10 minutes, from eggs, ham and grated Comté or a similar cheese. But, you may be thinking, what’s so special about a ham and cheese omelet? Well, mes amis, the art is in the making — the gentle lifting of the edges to create a fluffy concoction, the flick of the wrist to fold the omelet over itself, French style.

I was surprised to learn upon arrival in France that omelets are not a breakfast dish. They are served at lunchtime or as a simple supper, accompanied perhaps by crusty bread, a green salad and a sturdy bottle of red. Most cafés and brasseries have a variety of omelets on the menu, almost always including the mixte, with frites (French fries) served alongside. If eggs are consumed in the morning in this country, they are served à la coque (soft-boiled), accompanied by mouillettes — sticks of fresh bread.

France’s love affair with omelets can be gauged by the popularity of ‘giant omelet’ events in small towns across the country. In my corner of Burgundy, the tiny village of Les Ormes (population 337) attracts hundreds to its outdoor omelette géante festival every June. After consuming an omelet made of 5,000 eggs, participants are treated to fireworks and dancing. But this is nothing compared to the giant omelet festival in Bessières, near Toulouse in the southwest, where every year on Easter Monday more than 15,000 eggs (!) are cracked by 50 volunteers and cooked on a huge outdoor skillet.

The omelet is also part of French popular wisdom, as in the expression ‘on ne fait pas d’omelette sans casser les oeufs’ (you can’t make an omelet without cracking the eggs) — meaning, you can’t achieve your aims without taking the necessary risks.

And that’s my thought for today. So whatever your aims, have fun cracking the eggs and making the omelet. And…

This entry was posted in 4. Omelets, Soufflés, Quiche and tagged ham and cheese omelet, how to make a french omelet, omelette, recette, recipe. Bookmark the permalink.