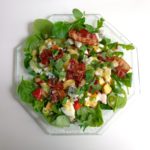 This classic American salad has taken Paris by storm in recent years, although the French have a way of doing things slightly differently. You will never see iceberg lettuce in a French Cobb, and instead of the traditional sweet dressing it will be served with a tangy mustard vinaigrette. The French also don’t worry about lining up the toppings in rows — they prefer to scatter the chicken, tomatoes, avocado, eggs and bacon over a bed of greens.

The original Cobb salad — involving chicken, tomatoes, avocados, eggs, bacon and Roquefort on a bed of leaves — was created at the Brown Derby restaurant in Hollywood in 1937 when, according to this amusing account,  the owner, Bob Cobb, was hungry one evening and raided the fridge. I first encountered a French Cobb around ten years ago at the Café Beaubourg, a delightful spot across from the Pompidou Center where it’s still on the menu. Since then la Cobb has spread to cafés and bistros across the city.

It’s especially popular in the summer — and the good news is that it’s incredibly simple to prepare, especially if you buy a rotisserie chicken instead of roasting your own. We are currently in a fierce heatwave over here, and I’ve made la Cobb twice in the past week. I was in a hurry due to a situation that can only be described, to use the name of a popular French TV cooking series, as Cauchemar en Cuisine (‘Nightmare in the Kitchen’).

It started last week when I decided to defrost the freezer. I took the advice of a frozen food salesman and used a hair dryer to melt the ice faster. Bad idea. The fridge/freezer stopped working. The new one I ordered turned out to be too big for the space. The delivery men plugged it in, gave a gallic shrug and shoved it in as far as it would go. The next day I ran the dishwasher. Suddenly our apartment was filled with electrical fumes. It had caught fire. It was on the same plug as the new fridge, which apparently used more power than the old one. I hired an electrician to put in an extra plug and ordered a new dishwasher. But when they installed it, the door was defective and wouldn’t close. What the heck?

This story has a happy ending because I now have a second new fridge, a second new dishwasher, and everything is working properly. The moral? Don’t defrost your fridge with a hair dryer. Or, better: forget about pre-cooked frozen food — cook the food yourself!

Meantime, a friend in New York has alerted me to the recent publication in English of The Madeleine Project, in which a young woman moves into a Paris apartment and documents what she finds about the previous inhabitant’s life, which spanned the 20th century. Among the things she uncovers is a charming recipe booklet. To view it, click here.

So, my friends — The Everyday French Chef is heading into vacation mode. You will be hearing from me less frequently over the summer, but watch this space because some dynamite recipes will be coming your way. Happy summer and…

This entry was posted in 3. Salads. Bookmark the permalink.