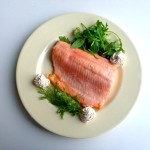 What makes this recipe really special is the balsamic cream, inspired by a recent visit to the Daniel Rose restaurant Spring. He served it with a poached pear dessert, but I so enjoyed the flavor that I thought it might also marry well with savory foods. For example, sea trout. The fish fillets are pan fried on one side only — à l’unilatérale, as we say over here in Paris — and served with balsamic-vinegar-flavored whipped cream alongside.

My father having been an enthusiastic river fisherman, I thought I knew quite a lot about trout until I began researching this post. We always had a freezerful of trout of one sort or another, which my mother served dusted with flour and fried whole. What I’ve now learned is that sea trout, also known as salmon trout, are actually the same species as brown trout, the difference being that brown trout remain in the river throughout their lives, while the sea trout head out to sea and then come back to the river to spawn. Making matters still more confusing, sea trout are not to be confused with spotted seatrout, also known as speckled trout — and from an entirely different family. Sea trout are of the same genus as Atlantic salmon, while the spotted variety are not…

If, like mine, your interest in trout is primarily culinary, then the merits of sea trout are in their delicate flavor and substantial size. One fish will easily feed two people. Serve the sea trout with a seasonal purée — of potatoes, cabbage or celeriac, in autumn, for example — and perhaps some wild rice. Other possibilities include braised finocchio and Belgian endive, lightly steamed spinach or French-style green beans. Or use your imagination.

Meanwhile, for those of you who may be interested, I’d like to draw your attention to an exchange about foie gras prompted by my post two weeks ago describing my recent visit to Spring. A reader objected most strenuously to the idea of a chef including foie gras on the menu. I replied with a French point of view. (The exchange is at the bottom of the post.) While many people object to the force feeding of ducks and geese to produce foie gras, not everyone shares that opinion. California chefs celebrated wildly in January when a state ban on selling foie gras was lifted. Here in France, foie gras is widely accepted, but other countries discourage or ban it. An opinion? Your thoughts would be welcome.