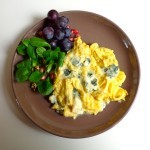 Making scrambled eggs with Roquefort may sound like a no-brainer, but in fact it’s trickier than you may think. If you scramble in the cheese too soon, your eggs will turn green — as I discovered when I first tried to make this dish. The inspiration was a small cookbook by the French author Marguerite Duras, whose work I studied in graduate school many years ago. But I tested her method and, well, it wasn’t pretty…

I found the recipe in La Cuisine de Marguerite, a charming book with photos from Duras’s country home in Neauphle-le-Château, outside Paris, and facsimiles of her handwritten culinary notes. The book was actually brought out in 1999, three years after her death, with the cooperation of her son, Jean Mascolo (Editions Benoît Jacob). Her instructions can be bafflingly brief, as in the recipe I tested. Here’s a translation:

‘1 — In a saucepan melt bleu d’Auvergne (or Roquefort if you’re rich) with milk, without any butter.
‘2 — Melt butter in a skillet without burning it and stir, mixing the milk and roquefort with the eggs.’

That’s the whole thing. No quantities mentioned. And the result was unfortunately green. Well, gray-green.

And by the way, you don’t have to be rich to buy Roquefort these days, at least not in Paris, where a nice-sized chunk (150 grams, or about 5 ounces) costs around 2 euros. So I tried a few different methods and came up with one that works. It takes about five minutes from beginning to end, requires no fancy equipment and is pleasing to both eyes and palate.

You may be wondering why I’m including such a simple recipe on this site. A friend of mine scoffed when I told her about it. But there are a few good reasons. First, it’s quintessentially French, what with the Roquefort. Second, it’s a wonderful lunch or brunch dish that goes equally well with coffee, wine or Champagne. And finally, it’s a perfect dish for everyday French chefs — inexpensive, very quick and oh so elegant.