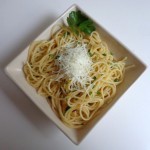 Did Marco Polo really introduce spaghetti to Italy when he returned from China in 1295? Apparently not. This ancient food — noodles, in one form or another — existed in China for millennia before the intrepid Italian adventurer arrived there, but it also existed in the Middle East and North Africa long before Marco Polo’s voyage, and most likely made its way to Europe from there. The French have enjoyed it for centuries…

In this recipe, steaming spaghetti is added to a mixture of minced raw garlic, extra virgin olive oil and finely chopped parsley — a French touch. It releases a fabulous aroma, and you can bring it to the table as is or with the addition of grated parmesan, cayenne pepper if you like extra spice, chopped raw cherry tomatoes, sautéed shrimp or all of the above. Personally, I prefer it unadorned. It is a perfect peasant food, simple and oh so tasty.

So when did spaghetti reach France? The history of pasta is rather unclear, but here are a few factlets I’ve been able to piece together: 1) Noodles made from millet dating back to 2000 B.C. were found buried in a clay pot in central China by an archaeological dig in 2005 — in other words, they were 4,000 years old. 2) The process of turning grain into pasta may well have made its way west from China along the Silk Route, reaching the Biblical lands. It was mentioned in the Jerusalem Talmud, written in Aramaic, in the 5th century A.D. — 700 years before Marco Polo set forth. 3) Pasta reached Europe even earlier than that. A noodle machine was uncovered in the ruins of Pompeii, the ancient city near Naples that was destroyed by a volcanic eruption in 79 A.D. 4) According to one theory, pasta was introduced to Italy from Greece, the evidence being of the etymological variety (the Greek word pastos meaning ‘sprinkled with salt’). I was unable to verify this, but I did also read that in Greek mythology there is a tale about Vulcan, god of fire, ‘pushing dough through a device that converts it into thin, edible threads.’ 5) According to another theory, pasta moved north across the Mediterranean from Libya, where it had arrived via Arabs from the Middle East. 6) The historian Al-Idrissi wrote about encountering spaghetti in Sicily in the 12th century, well before Marco Polo’s birth.

I’m not a historian, so please correct me if any of this is wrong, or if you have additions to make. What I can say is that pasta has featured on Parisian menus for quite some time, having presumably made its way north from the French Mediterranean. In fact, when Thomas Jefferson encountered pasta while serving as American ambassador to Paris, he liked it so much that he brought a macaroni machine back to the United States in 1789. Pasta today is one of the most popular dishes among the French. The rustic version in today’s recipe is one of the simplest, and tastiest. I hope you’ll enjoy it.