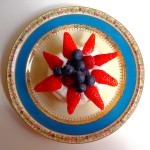 What do the French mean, exactly, by fruits des bois? ‘Fruits of the forest’, yes, but then? Originally the term meant wild berries, but today it encompasses strawberries, raspberries, blueberries, blackberries and perhaps the occasional red or black currant — all of which you are far more likely to find in a garden than in the woods. In English we’d just say berries, and as the season approaches a fine way to serve them is with cream on a meringue.

In this recipe, the meringues are constructed as shells, which is fun — you’re an architect as well as a cook. They are then gently baked before being filled with freshly whipped cream and topped with the berries. You can flavor the cream with vanilla, cognac or rum, depending on the age of those around your table. And by the way, these treats are a huge hit with the younger set — my daughter (15) devoured three of them before I had time to take a photo, meaning I had to make them again the next day…

The only tricky part is that egg whites can be temperamental — if they’re cold, or if there’s even a tiny bit of yolk in the whites, they may refuse to be beaten into firm peaks. But at the same time, eggs are easier to separate when they’re cold. The best plan is to separate them straight out of the fridge, and then allow them to warm up for about an hour before beating. When you’ve incorporated the sugar and the whites are firm, you can use a pastry tube to snake the meringue into the form of a circle and then build up the sides. Lacking a pastry tube, you can make mounds of meringue and then scoop out the middle.

The cream, in contrast, needs to be icy cold. Chilling the bowl in which you’ll be whipping the cream will provide best results.

I first encountered this dessert in a branch of the restaurant Le Pain Quotidien in a far-flung quarter on the edge of central London. My daughter loved it so much that she took photos of it with my iPhone, and these photos inspired me to try it myself. It’s as delectable as it is pretty, and a definite crowd pleaser.