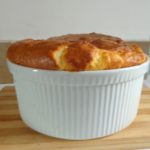 Soufflés are often regarded as too difficult to attempt at home. I found this to be true when, as a young woman inspired by Julia Child, I set out to make one. Julia’s recipe for cheese soufflé in Mastering the Art of French Cooking stretches across nine pages, with long paragraphs on subjects like how to beat egg whites by hand. Not to be intimidated, I tried — with dubious results. Only after moving to Paris did I discover there is an easier way.

Soufflés require a certain amount of organization, but once you have your equipment prepared you can whip one up in about 15 minutes. Separate the eggs, grate some cheese, make a sauce of butter, flour and milk, stir in the cheese, then the yolks, beat the whites, fold in and you’re done. And guess what? You don’t have to beat the egg whites by hand.

Now don’t get me wrong — I adore Julia Child. But once I began meeting Parisian friends who showed me how to cook wonderful French dishes without spending hours in the kitchen, I took a new look at Julia’s recipes. Her modus operandi, I impertinently concluded, was: ‘Why to make it simple when you can make it more complicated?’

So why is Julia Child’s approach to French cuisine so painstaking? I think there are two reasons. First, she studied classic French cuisine in Paris at Le Cordon Bleu, where the standards were very rigorous — so rigorous, in fact, that she failed her final exam and had to retake it! This cooking school was turning out chefs who could work at top French restaurants. When Julia wrote Mastering, she had her school’s standards in mind. Second, she was writing for American readers, most of whom had little or no experience of French cuisine at the time the book was published in 1961. My theory is that Julia wanted to give her readers authenticity, never mind how complex the recipes became.

She simplified in later books based on her television appearances as The French Chef, but her approach remained far more complicated than the style of the French ‘chefs’ I encountered in their own homes. I still consult Julia Child’s cookbooks quite regularly, but over the years I learned to speed things up by paring away the unnecessary steps, without sacrificing authenticity. And this is what I am seeking to pass along to you, dear readers.