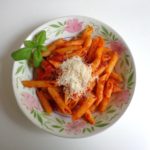 We’ve been having a September heat wave. Maybe this explains why so many Paris bistros are featuring Italian dishes at the moment. Most popular seems to be the assiette italienne, typically melon, parma ham, tomatoes, mozzarella and basil. But pasta is omnipresent too. At the ultra-trendy café Merci the other day, the special was a salad of pasta in pesto. In tune with this spirit, I decided to post one of my favorite pasta recipes.

How long ago did this dish cross the border? I think it’s safe to say that the French have been enjoying Italian cuisine ever since  Caesar conquered Gaul in 52 BC. And indeed, just as Caesar hailed from Rome, so does this dish. The pasta is so spicy that it is said to be arrabiata, variously translated as angry, enraged, furious, even rabid — not surprising, as the root is rabbia (‘rage’). You can vary the heat according to taste. The real charm of this dish, from an everyday chef’s perspective, is that it is so quick and easy to prepare.

I started making penne à l’arrabiata many years ago after a visit to Rome, where I acquired a cookbook called Roma in Boca (loose translation: A Mouthful of Rome). The recipes come in three languages — Italian, English and the Roman dialect — and they are delightfully imprecise. For example, the recipe for the penne begins, ‘Fry in some oil, 3 or 4 cloves of garlic with some hot chilli — the amount here obviously depends on the individual taste — however, it should be quite a lot for the pasta to be really “angry”.’

Over the years, I’ve adjusted the ingredients to suit my own taste. My recipe uses enough cayenne pepper to make the tomato sauce fiery, but not incandescent. Instead of chopped parsley, which is traditional, I flavor the sauce with a little fresh basil. And while the Romans generally serve arrabiata without cheese, I add some grated parmesan on top.

It takes no more than 15 minutes to prepare this dish — perfect for when your kid comes home from school saying, ‘Mom, I’m starving.’ The ingredient list is so basic that I generally have most or all of the items on hand. But the simplicity is deceptive. Serve small portions of arrabiata as the first course at a dinner party, and your guests will applaud its rustic elegance. All you need to go with it is a bottle of red strong enough to take the heat.